Relief comes to families on a hill in Cambodia 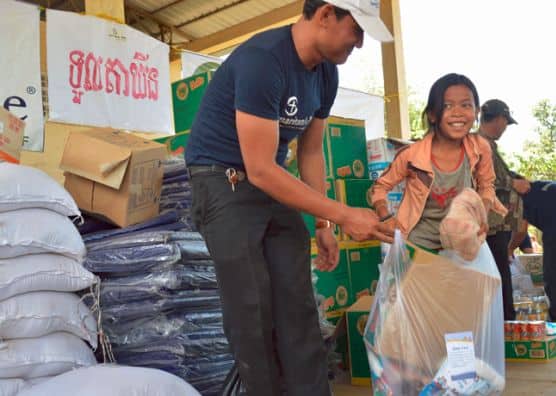 Hundreds of Cambodians receive help from Samaritan's Purse after severe flooding drove them from their homes. 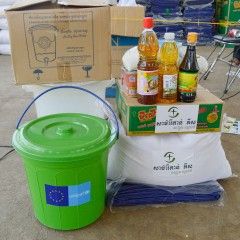 In Kratie city, one of the trucks peeled off   to pick up 350 ceramic water filters, 350 lidded buckets, bars of soap, and a large supply of Aquatabs.

We drove to the dock and then used two small motorboats—traveling back and forth from 8:00 a.m. until 1:00 p.m.—to take the supplies to Takeem safety hill. Families who had fled to the higher ground to escape the flooding eagerly waited for the supplies.

While the boats were coming and going, I explored a little cement health center on the hill. I took a mental inventory of their supplies: two almost-empty bottles of anti-dihedral medications, one bag of saline solution, salt tablets, an array of metal instruments and gauze. That was it. People kept approaching me begging for medical treatment, money and the food we were stacking and organizing under the only two shaded platforms.

After seeing the available medical supplies, I realized I could not help the people clean the sores in their mouths from drinking contaminated river water or the infected mosquito bites all over the children’s legs, feet and heads. I called the dock in Kratie city for some supplies and attempted to stay out of the way of the loading/unloading operation.

By early afternoon the entire Samaritan’s Purse team was present and the last supplies were en route to the hill. We divided the approximately 700 adults and children under different platforms. Part of the team organized games and shared the Gospel with the children, while the adults were taught how to use the new ceramic filters and Aquatabs.

After about an hour of games and lessons, the children reunited with their parents while the provincial governor and other leaders spoke to the crowd, assuring them of a quick end to their miseries and praising the support of Samaritan’s Purse and other organizations that took notice of their plight.

Learn More  about the Samaritan’s Purse flood response in Cambodia

Then, one Samaritan’s Purse team member on each platform began to announce the names of the beneficiaries. One by one, men and women, young and old, all went through the line and received a bag of food, the tarp, the bag of rice, the bucket, and the filter. Midway through the line, staff members handed out Gospel tracts and ministry materials to the people and told them about Christ. Many smiled widely when they received the printed words of hope, and I didn’t see any on the ground once we left—a sign that they had taken the materials home and wanted to read them.

The distribution ended at about 5.00. I finally found the medical supplies and began treating people as best as I could. It was rewarding to see that many of the people I had treated two days prior were getting better. I only had to change bandages and clean fresh wounds.

Since that day, the water has subsided, and the majority of stilted homes are no longer submerged. Many of the families who were stranded on Takeem and other safety hills have returned to their villages.

However, Samaritan’s Purse Cambodia is still watching this area closely. The Mekong River is expected to flood again soon and if it does, we are ready.