Samaritan's Purse is helping put a stop to human trafficking.

December, 2015—The people of Yeay Ort and Chouk Chey villages in Cambodia entered 2015 with empty stomachs. Drought had followed them into the new year, and many families worried how they would feed themselves if the rains were late again.

In Chouk Chey this meant that little or no work was available in the nearby fields of Thailand, where they migrate as day workers. In Yeay Ort, another year of failed rains threatened a catastrophic blow to the rice farmers.

People began scavenging in the forest for frogs and rats to satisfy their hunger. Malnutrition loomed and people in both villages became prime targets for labor and sex traffickers. Unscrupulous labor brokers are always on the prowl for desperate Cambodians who might leave their communities in search of a steady wage.

Thankfully, 2015 is ending with a different story for these villagers. 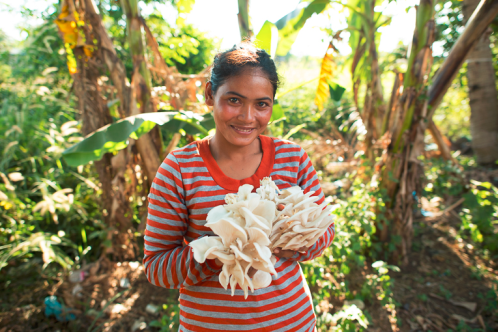 In addition to the new irrigation system, our teams have been working to distribute food, mushroom spores, seeds, fertilizer,  and to create linkages to local markets. With the mushroom spores, we provide training in cultivation and the expertise to help build a proper growing hut.

Hundreds of families now have the opportunity for a safe, sustainable future. They are better-equipped to  protect themselves from the financial and physical desperation that makes unsubstantiated job offers from traffickers so appealing.

Please continue to pray for the people of Cambodia. Many remain in great physical and spiritual need.