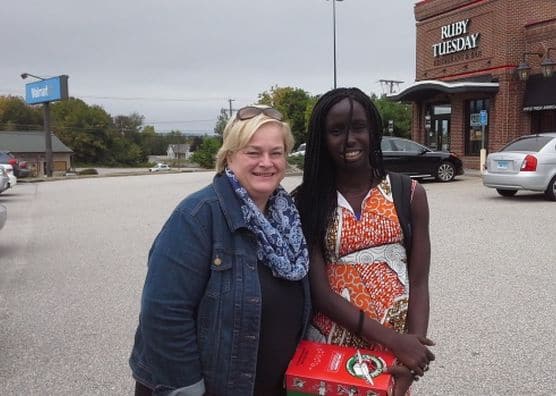 "Hugs were filling in where words weren't even there to describe it," says Sudbury's Karyn Mathewson

Written by CBC News
Published by CBC on Tuesday, September 22, 2015

A shoebox filled with a few small gifts and words of encouragement has forged a very special bond between a Sudbury woman and a 14-year-old girl in Senegal, West Africa.

Karyn Mathewson is the logistics coordinator for Operation Christmas Child in Valley East. For more than 20 years, she’s been spending her free time and money shopping for deals in an effort to fill shoeboxes with gifts for children around the world.

The more than 1000 boxes she makes up each year-filled with toys, clothes and school supplies-wind up mainly in young hands in Central American and West African countries.

But until recently, Mathewson had been sending the boxes anonymously. That was until, on a gift giving trip to Costa Rica, she watched a little boy open his box.

“In my mind, I would have wished there had been more in it-more toys, or something fun,” she said.

“But at the end of the box was this beautiful letter written by an 82-year-old grandmother that went on and on about how much she cared for him, even though she didn’t know him.”

“And he hugged that letter, and it meant so much to him.”

Since then, Mathewson has been including a typed note and a special email address for the kids to write back to in case they have internet access.

Much to her surprise, Mathewson received an email recently from a girl who had received her gift. Naomi Nakigan, 14, of Senegal, wrote to say thank you for her special shoebox.

“It was overwhelming just to know that … we’d connected like that,” said Mathewson.

The girl kept emailing Mathewson after that, with word of her school exams or other things on her mind. Soon, Mathewson heard that Naomi had been selected for a special school field trip to a school in Connecticut, USA-and in May, she jumped at the chance to meet her young pen pal.

“Hugs were filling in where words weren’t even there to describe it.”

“She remembered some of the nice things that were in [her shoebox] like hair ribbons, and she explained to me how important school supplies are to have in a box, because if you don’t have them in Senegal, you can’t go to school.”

Naomi reports that her goal now is to get into a career in medicine-and Mathewson said she’s encouraging the ambitious teen to apply to the Northern Ontario School of Medicine in Sudbury.

As to why she keeps filling up the shoeboxes, year after year:

“I just believe in hope,” she said. “And I see the impact a small gift has on a child.”

Listen to the complete interview with Karyn Mathewson here.