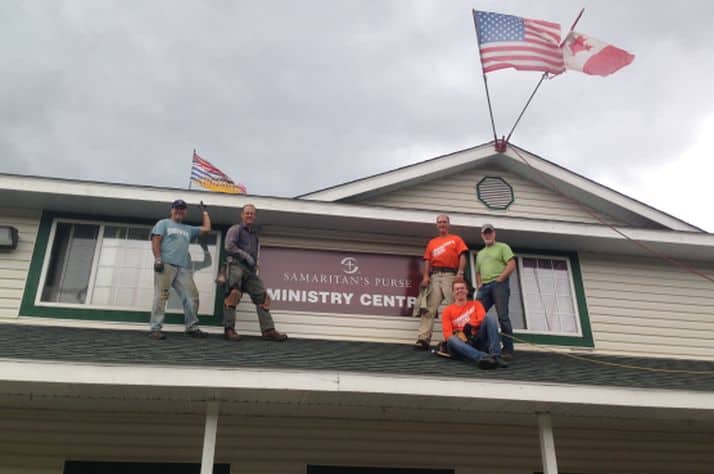 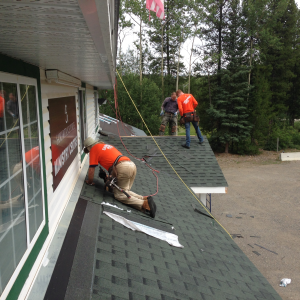 The crew works at installing the shingles on the Samaritan’s Purse Ministry Center in Dease Lake, BC.

July, 2015—I had the privilege of joining a five-man crew that finished installing the shingles in mid July. The other four crew members—Kyle Ellergodt from Calgary, AB Ian Pennoyer from Edmonton, AB  Andrew Bashor from Grand Forks, BC and Andy Northup from Halifax, NS—worked on it for seven days, while I did for five, after arriving at the center to fill in for manager Larry Nanninga while he and his wife Trixi went on vacation.

Kyle, the roofing project leader, and a member of Samaritan’s Purse’s Southern Alberta Restoration Project team in Calgary that is helping 2013 flood victims restore their homes, is an experienced roofer. So are Ian and Andrew, whereas Andy and I were not! We served primarily as laborers. 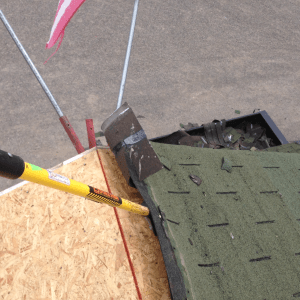 Special shovels were used to scrape off all of the old shingles and remove all the old nails from the large two-storey structure.

Together, the five of us used special shovels to scrape off all the old shingles and remove all the old nails from the large two-storey structure. Then we applied a layer of water-proofed tar paper, and started nailing down the new shingles—in the same attractive shade of green as the old ones.

I quickly learned that roofing, including carrying 85-pound bundles of shingles, is tiring work! But it was also very rewarding working alongside four very Godly men who continually encouraged each other, and regularly took time to pray—including for everyone’s safety while we were so high above the ground.

It was important for the ministry center to have a new roof to ensure the former restaurant is properly maintained so Samaritan’s Purse can continue reaching out to youth in an isolated part of Canada. The center is in Dease Lake—1,750 kilometers north of Vancouver, and just east of the Alaskan panhandle. The small community and surrounding area are home to the Tahltan First Nation.

Young people come to the center every weekday afternoon and early evening, with different age groups scheduled on different days. I had the opportunity during my second week there to see first-hand how our youth workers have established meaningful friendships with local children and their parents through a variety of activities including crafts and games, skateboarding, cycling, hiking, and eating together.

When we opened the center last year, some people questioned whether we would have any impact. The impact was evident all around me as I watched the children laughing and playing. 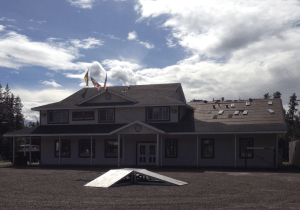 The impact also became evident in another way during our roofing efforts. A trucker from Oregon, on his way to deliver a load to Whitehorse, stopped in to say hello. The man said he regularly travels north and south along Highway 37 through Dease Lake, and was concerned that local youth had so few recreational options to keep them out of trouble.

A waitress at a restaurant near our center told him of the good we are doing in northwestern B.C., and he stopped by to personally thank us—and make a donation to help us continue our youth ministry! We tired roofers took it as one more sign that God wants Samaritan’s Purse to be here. 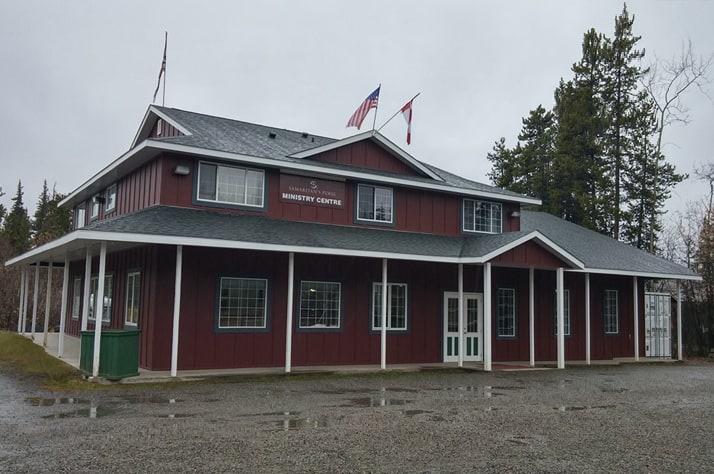