Midwife welcomes little one safely into the world 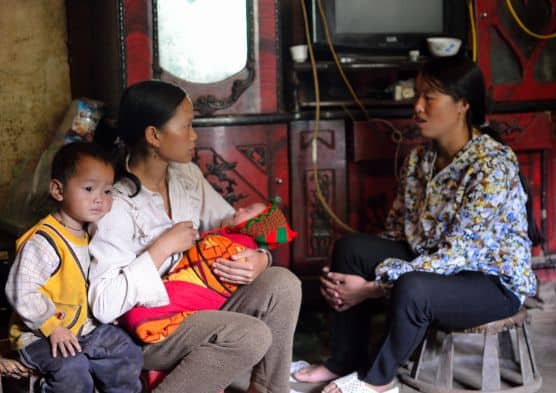 A traditional birth attendant named May and a mother named May journey together on the road of motherhood in remote Vietnam.

November, 2014—A friend told me during a recent visit to Vietnam that he often feels as though he is in multiple centuries at the same time in this country. As I traveled north to the highland provinces along the China border to visit several Samaritan’s Purse projects, I understood what he meant.

An overnight train completed the first leg, then a van drove us along winding roads clinging to the sides of steep mountains covered in terraced rice fields. As we neared the village of Hoang Ho in Sin Ho District, we journeyed the last kilometer on foot over a small suspension bridge. As we walked, we saw hardworking farmers cultivating their fields with water buffalo and women walking with large baskets filled with produce and firewood on their backs.

We were greeted and welcomed into a small home by two young women named May. The first, May Si Tan, is a 23-year-old mother of two who recently graduated from a Samaritan’s Purse-sponsored traditional birth attendant (TBA) training program. The second, May U Tan, was our host, and she had just delivered her third child.

Married at 15, our host and her husband sadly lack the usual family support that might exist—his parents and her father are  deceased and her mother lives far away. They are from the Dao tribe and have no livestock or land on which to grow crops—a perilous situation financially. As one of the neediest families in the village, they live in what is known as a “love house,” built by the community for the young family.

Watching the two Mays, it was obvious they were friends. They live just a few houses apart in their small community of 106 families and their young children are close in age. They smiled and laughed together as they told the story of May U Tan’s most recent pregnancy.

The TBA had conducted regular prenatal check-ups and the women had decided that the mother should deliver in the local hospital, as she had done with her first two children. However her labor started very quickly and she was home alone with her two toddler boys and had no way to reach the clinic.

“I was working in my rice field when she called me on my cell phone,” said the TBA who immediately rushed to her friend’s home to help. As she ran, she called her husband and asked him to bring the kit she had received from Samaritan’s Purse. It contains supplies such as gloves, scissors, and other essentials for a hygienic home delivery.

When she arrived, the baby was just emerging. She quickly washed her hands, donned gloves, and was able to help May safely deliver the infant, cut the umbilical cord and clean up the little baby girl.

For the mother, the presence of a familiar face, particularly one with special childbirth training, was calming. “When she arrived, I was no longer afraid,” she said with a smile.

As for the TBA, “This was my first experience with a birth outside the hospital,” said May, “but I wasn’t scared. I felt prepared.”

As we sat on low bamboo stools in the dimly lit home, we soon heard soft cries in the next room. Mother May rose and returned with her tightly swaddled beautiful baby daughter who was quickly soothed in her mother’s arms. I looked down at the hard-packed earth floor beneath my feet in the very room where the delivery happened and I was amazed at this precious girl’s safe entry into the world.

When I asked about the training she received, TBA May said “I was proud to have the opportunity… I wanted to study to serve my community.” Her dedication is obvious. She checks in on this mother and baby two or three times a week and is monitoring three other expectant mothers in the village.

“I always think about my role,” May continued. “Even when I’m working in my field I’m making plans to visit mothers in the evenings.” And she always keeps her cell phone handy, just in case. 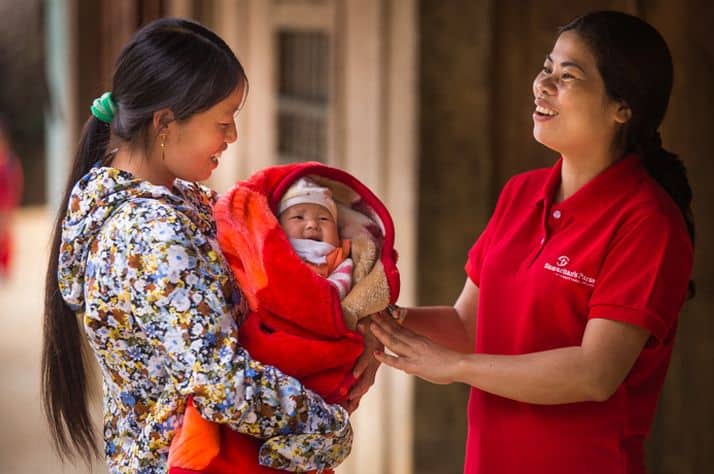