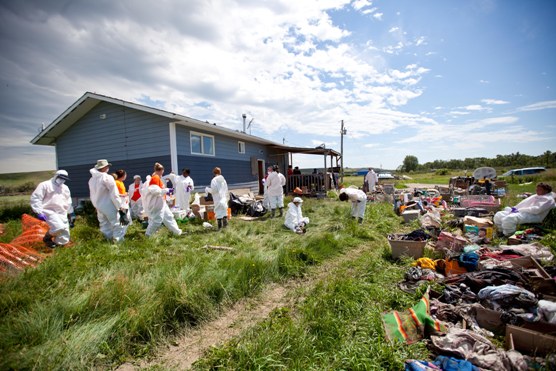 A Siksika Nation woman affected by the 2013 southern Alberta flood rejoices at the recovery of a special possession close to her heart.

During the 2013 southern Alberta floods,  I volunteered at Siksika Nation, where waters from the Bow River’s overflowed banks wiped out people’s homes, belongings, and treasured possessions.

One woman stood by and watched as we tore out damaged walls and carried armloads of mud-soaked items from her house. We must have filled two dumpsters full of belongings that were completely destroyed.

But there were a few things that we were able to salvage. I observed from a distance as the woman sifted through a table covered with personal mementos. I found myself puzzled by her response.

Out of everything on the table, the woman began to weep when she uncovered a small, pink cloth. Her tearful response to finding what looked to me like a washing rag seemed strange until she shared her story with me.

Several years before, the woman was struggling with breast cancer. Finally she became so discouraged and weak that she was convinced that she would die. But in the midst of this woman’s fear, a friend came alongside her, giving her a pink cloth that symbolized courage, endurance, and hope. She survived the cancer.

Last week, as she  looked over  her destroyed home and possessions, the woman again felt that she was facing one of her darkest days. Discouragement and hopelessness clung to her as she lost nearly everything to the flood waters, and then to the mould.

But again, like so many years before, the woman found that pink cloth-a symbol of her ability to overcome adversity; a symbol of hope in the midst of crushing hopelessness.

This woman’s response to the flood is being reflected by countless Siksika people living in the Bow River valley. Grief and shock are emanating through the community, and there is a deep sense of loss-not so much  for the things they have lost, but of the treasured memories and history that attaches itself to these symbols of their lives. What has been lost is a part of their story, a part of their community history and a part of themselves.

May all whom we encounter come to know the Lord and his plans for them, “plans to prosper you and not to harm you, plans to give you hope and a future” (Jeremiah 29:11, NIV).