Samaritan's Purse delivers relief to villagers in remote areas hard-hit by the earthquake.

May, 2015—A little boy asked a member of the Samaritan’s Purse disaster response team how he was doing at our first distribution of food, kitchen kits, and blankets in Nuwakot, Nepal. The staff member replied that he was doing fine and asked the boy the same question.

Samaritan’s Purse is coming to isolated communities like this to bring aid and hope to earthquake survivors who aren’t receiving any other help.

Hundreds of quake victims lined up in the sweltering heat on Monday to receive the first help that has arrived in their rural community. Some of them walked four hours to get there.

They carried heavy burdens of loss and fear—exacerbated by aftershocks that continued throughout the day. But on the way home, the people also took back tangible reminders that they are not alone.

“Samaritan’s Purse is here first and foremost to share the love of Jesus Christ, but also to meet practical needs of people that are hurting because of this disaster,” said Zach Sprau, who helped coordinate food at the distribution. 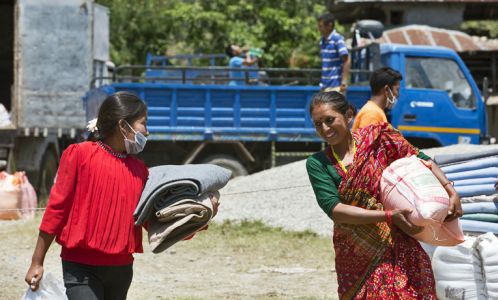 Food, blankets and kitchen kits will meet the needs of earthquake survivors who lost everything.

The food supply included rice, lentils, salt, and oil. Each pack feeds a family of five for a week. For people so hungry that they have been digging scraps of food out of the rubble, there was no time to waste.

“Many of these families only have food for a few more days,” Sprau said. “So it’s pretty urgent that we get food out to them now.”

Ushalama, a mother of three, said she was going back to cook the food we provided for dinner. Her family made it out of the earthquake unharmed, but they lost everything.

Since 25-year-old Bina Shrestha’s house collapsed, she has been sleeping outside with her family, including two young sons. The items in the kitchen kit she received pots, bowls, plates, cups, and utensils are now some of the only things she owns.

“We haven’t been able to get our things out of our house yet,” she said. “Even just to get this much is a big deal for us, so thank you.”

A young soccer player, Naroyan Bhandaui, stood in the middle of the open field, surrounded by rice paddies and mountains, and explained how he was still afraid of another earthquake. The relief supplies provided a glimmer of hope.

“Samaritan’s Purse is here. I really appreciate this,” he said. “This is a very big, big help to us.”

Samaritan’s Purse will be here over the next several weeks, continuing to give food, water, relief supplies, and medical aid to earthquake survivors in remote areas where no one else is going. Please pray for these suffering people who have lost so much, and that they will see the love of Christ as we work.