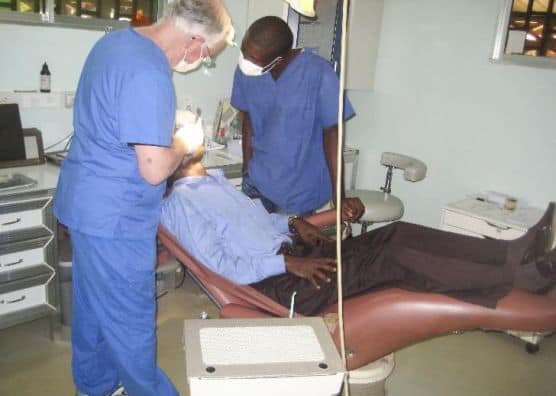 One Central Alberta man is doing what he can to help those in need and is encouraging others to do the same.

During the last week of January and the first week of February Dr. Bill Hill, a dentist living just outside Lacombe, visited the Trinity Dental Clinic near Monrovia, Liberia, West Africa as part of a two week mission trip with World Medical Mission, a subsidiary of Samaritan’s Purse.

While Hill had been on other mission trips before, mostly with Health Teams International, this was his first with World Medical Mission. He said he got involved with World Medical Mission when co-workers told him about representatives who were looking for someone to go on a trip not to Liberia, but Bolivia. When the Bolivia mission trip fell through, Hill went to Liberia instead.

Hill said he has been doing mission trips on and off for the last nine years and wanted to get involved with them long before that. He said there are so many people in the world that are without basic services, such as simple dental care and he wanted to do what he could to help them.

“There is a lot of people out there and a lot of need. It’s good to be able to do something to help when you can.”

Hill went on to say that it is important to him, as a Christian, for both the physical and spiritual needs of people to be cared for. As such, he is happy to work with faith-based organizations like Samaritan’s Purse and Health Teams International, both of which Hill said he has a huge amount of respect for.

There is certainly a dire need for dental care in Liberia. Hill said he has been told there is a total of three licensed dentists in Liberia, a country whose population is estimated between three and a half million and five million.

Even if there were more dentists in the country, it would still be difficult for most of the population to receive care as they could likely not afford it. About 85% of Liberia’s population lacks formal employment.

While Trinity Dental Clinic is not able to offer services completely free, it does strive to keep charges as low as possible, said Hill. This means that patients are able to get an extraction for only a few dollars.

Trinity Dental Clinic is without a permanent resident dentist. Most of the work is done by a dental therapist, even cases that in Canada would be referred to an oral surgeon.

Dental therapists don’t have the same qualifications as dentists, but at Trinity Dental Clinic there is no one else to do the work, said Hill. Because of this, the Liberian government allows the clinic to continue operating without a permanent dentist but has dictated that a fully qualified dentist must visit the clinic every so often, which is one of the reasons Hill was there.

Trinity Dental Clinic’s lead dental therapist, who Hill knew only as Eddie, would like to not only become a fully qualified dentist, but also a oral surgeon, said Hill. He added that Eddie would also like to turn the Trinity Dental Clinic into a school to train more dentists.

Hill said that in the two weeks he worked in Liberia, he saw two people with potentially lethal conditions that had stemmed from oral health concerns. He added he has never seen such severe cases before in his life.

“I’ve been in practice for 43 years,” said Hill. “I’ve never seen anything like that before.”

For Hill, it is important that people in first world countries like Canada know what kind of work groups like Samaritan’s Purse are doing because they are the people who can help. He added that in Canada, it is easy to forget that elsewhere in the world, there are people who do not have any kind of access to the simple services that most Canadians take for granted.

“We are so terribly spoiled and we have no idea how spoiled we are,” said Hill. “I don’t see how we can just stand by and leave people to suffer.”