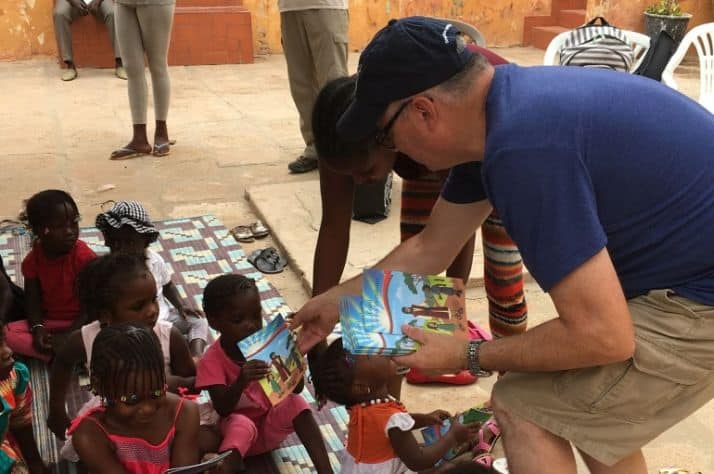 This July, 8,255 km from home in the high humidity and heat of Senegal, West Africa, Gerry Unger saw firsthand the fruit of his two decades of labour.

For over 20 years as the region’s Operation Christmas Child Coordinator, Unger has spent his fall and winter months coordinating and collecting the avalanche of Christmas shoe boxes that cycle through the local Samaritan’s Purse depot every November.

Christmas shoe boxes can become exactly that for many, containers that need to be filled, sorted, stacked and shipped.

This summer he was reminded why the unassuming packages are his life’s work.

As part of the Samaritan’s Purse distribution trip, Unger helped hand out nearly 4,000 shoeboxes filled with toys, books, and necessities to children over ten days.

“To see those kids get the shoe boxes, to see their excitement, was just incredible,” he says.

Children also hear the gospel message as part of the distribution and asked if they’d like to receive Christ.

Samaritan’s Purse also provides Bibles to the children as many are first generation Christians.

One of his favourite moments was hand-delivering a shoebox in a prison to the child of an inmate.

He notes it was a shoebox he personally packed together with his wife.

“In a sense, each person that packs a shoe box is representing God because God gave his life freely, He gave a gift,” Unger says. “And you’re giving a gift freely to these kids which are in line with what God wants us to do.”

The Christmas shoe boxes have become so popular overseas, Unger says many pastors are imploring North Americans to pack more.

“Each one said, “we need more” because they have so many kids,” Unger explains. “The pastors say, ‘if you packed one box last year, pack five more this year.'”

Many families in the Pembina Valley make the Samaritan’s Purse Operation Christmas Child Campaign an annual tradition, filling shoeboxes with toys, tools, toiletries, and more for children in need around the world.

Last winter nearly 7,000 shoe boxes were collected from individuals and churches in the area.