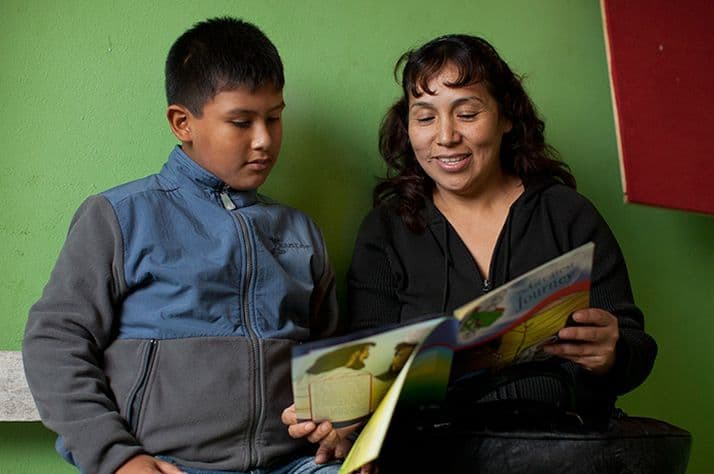 A young boy in Ecuador helps lead his grandmother to faith in Christ through The Greatest Journey, the Operation Christmas Child follow-up discipleship program.

When 8-year-old Angel was invited to a Christmas festival at an evangelical church near his home in Ecuador, his grandmother said no. She said she believed in God, but she was suspicious of the teachings at the church. Angel’s grandmother was his lone caretaker and very protective of the young boy.

Angel pleaded, and his grandmother finally permitted him to go to the celebration. He enjoyed participating in the music and the games and heard a message about the coming of Jesus Christ to save people from their sins. He was especially thrilled when he received a shoebox gift from Operation Christmas Child.

When he returned home he excitedly told his grandmother all that had happened.

“I heard about the love of God,” he told her, “and I received a box of gifts for boys.”

His grandmother was still skeptical about the church, even after she saw the toys and school supplies and how happy they made the boy.

Angel and other children in their town were invited back to the church a short time later to begin a special Bible study for kids. It was The Greatest Journey, the follow-up discipleship program used by Operation Christmas Child to help children become faithful followers of Jesus Christ. But his grandmother had forbidden him to go back to that church ever again.

A teacher at the church lived in their neighborhood. He was on his way to the Bible club one day when he walked by Angel’s house and saw the boy and his grandmother standing outside. Angel looked so sad.

“Let him go,” the young man insisted. “We are learning about God.”

The grandmother looked at Angel’s hopeful smile. “If I let him go, I will have to accompany him, because I don’t want him to learn the wrong things,” she said.

They began to go to the Bible club together—every week. Halfway through the 12-week course, Angel’s grandmother told the teacher, “How could I be so blind? If my grandson is learning about God, I have to let him follow Jesus.”

The teacher gave Angel and his grandmother a Bible and asked them to take it home and read it. The next week, they arrived at the Bible club early to speak privately with him.

Angel’s grandmother explained that they had been reading the Bible together, and she would like the instructor to show them how to receive Jesus into their hearts.

The little boy spoke up.

“Abuelita,” he said, “I already accepted Jesus on the day I went to the Christmas party. Now you have to accept Him too.”

Greatly moved himself, the teacher led the elderly woman in an emotional prayer to receive Christ as her Savior.

“It was a very special time, and I could not contain myself,” the teacher said. “I started to cry as I saw how God used Angel’s life to save his grandmother.”