Kindness delivered from Oakville to Costa Rica in a shoebox 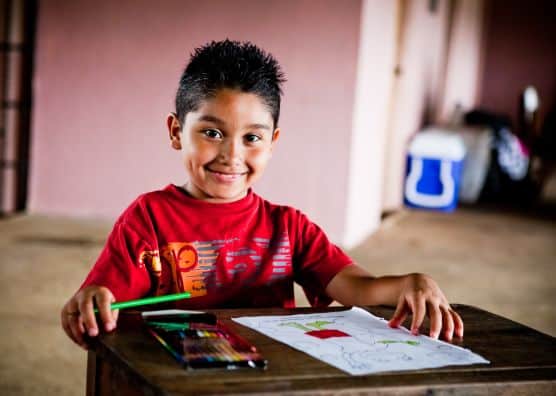 Oakville's Ingrid Kyriacopoulos delivers a shoebox of gifts to a child in Costa Rica.

They were small packages filled with toys, candy and school supplies, but to a few hundred children in Costa Rica they meant the world.

Last year, the Christian charity oversaw the packing of 664,000 shoeboxes with gifts destined for children in 14 countries during its Operation Christmas Card.

Kyriacopoulos helped deliver a few hundred of these boxes during the Aug. 2-9 trek.

“For the children we saw, this was probably the only gift they have ever received and they seemed so thrilled that strangers would come and bring a gift for them personally. They were just beyond excited,” said Kyriacopoulos. “It was quite amazing to see their faces.”

Kyriacopoulos, who works as an administrative assistant at the Royal York Baptist Church in Etobicoke, said she has been involved with Samaritan’s Purse Canada for some time and has packed gift shoeboxes for them for the past several years.

She also organized shoebox packing drives at her church and was responsible for getting them to Samaritan’s Purse collection centres in Mississauga and Kitchener-Waterloo.

Recently, Kyriacopoulos went on a trip to Costa Rica with Samaritan’s Purse.

“It was quite an experience, having packed the boxes for so many years and then actually giving the boxes to the children,” she said.

The Oakville resident’s group travelled to the city of Cartago to deliver the shoeboxes.

Many of the homes they visited had one room and were the size of a kitchen. Families slept on the floor.

Many of the shoebox distributions were preceded by face painting and crafts and lunch, which Kyriacopoulos was shocked to learn was the first time many ate that day.

Shoeboxes were also distributed at an orphanage, where children had been rescued from the streets where they were involved in prostitution and drug dealing.

“It’s very hard to see how children live there compared to most of the children we see here,” said Kyriacopoulos.

Kyriacopoulos said the children were delighted with their shoebox gifts and especially photos and letters from the senders.

Samaritan’s Purse had translators present to tell the children what the letters said.

“Each of these children seemed to appreciate that someone cared for them. Here’s this group of people from a far away country bringing them gifts and showing them that they are loved, they are not forgotten and that they are special,” said Kyriacopoulos.

Kyriacopoulos said a young man approached her at her hotel and told her about how, as a child, he had been the recipient of a Samaritan’s Purse shoebox.

“He received a box when he was seven and in the box there was a tape measure and he still carries the tape measure,” said Kyriacopoulos. “He’s 20 years old now. This just meant so much to him.”