‘It Was a Wicked Storm’

Samaritan's Purse crews in the Florida Panhandle and south Georgia are working to help residents recover from Hurricane Michael.

Twenty miles from the Gulf of Mexico, the town of Wewahitchka, Florida, is usually safe from hurricanes. Residents have seen many storms lose strength as they approach the coast. 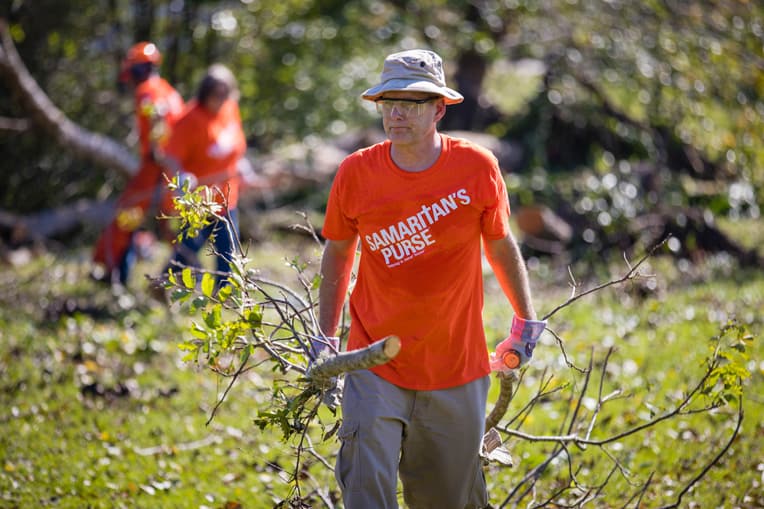 Volunteers are working in the Florida Panhandle where homes were hit hard by Hurricane Michael.

But Hurricane Michael was like no other storm they have ever seen. It suddenly strengthened into a Category 4 monster and plowed across the Florida panhandle all the way into Georgia.

“It was a wicked storm,” said Mike Stroud, pastor of First Baptist Church in Wewahitchka, where Samaritan’s Purse has set up one of our Disaster Relief Units. His family rode out the storm in the church’s family life center, and he described the harrowing experience as they prayed for their lives. He watched trees topple, awnings rip to shreds and debris, metal, and shingles fly through the air.

When the storm finally cleared, Wewahitchka looked like a ghost town. Trees blocked the roadways and debris was scattered. Pastor Mike began checking on community members and looked for ways to meet the most pressing needs, but he still felt paralyzed by the magnitude of devastation.

Samaritan’s Purse quickly established a base of operations in Wewahitchka, where 19 Canadian staff are working out of. From this location volunteers are reaching out to Mexico Beach, Port St. Joe, and other communities. Another team is working further inland in Albany, Georgia, which has endured two hurricanes and a tornado in the past two years.

Samaritan’s Purse Canada deployed to the Florida Panhandle providing additional support to the U.S.-based teams who are spread throughout the southeast in response to Hurricanes Florence and Michael. Homeowners were shocked to find out that volunteers not only came from across the country, but also Canada to help them recover from the storm.

Darren Beers, a team leader from Canada, was not deterred by the distance. “It’s important to go because it gives people hope. Their lives have been turned upside down, but this gives them a chance to start over,” he said.

Vera Rozier, a 94-year-old widow, was the first homeowner Samaritan’s Purse assisted in the Florida Panhandle. Vera was overwhelmed by the destruction. Surrounded by downed trees and debris, her home of 58 years was hardly recognizable. She didn’t know where to begin.

Despite the devastation, Vera’s faith never wavered. When she saw her home for the first time after the hurricane, she praised God because even though her house was severely damaged, her family’s lives were spared. “His blessing is greater than the loss,” she said. 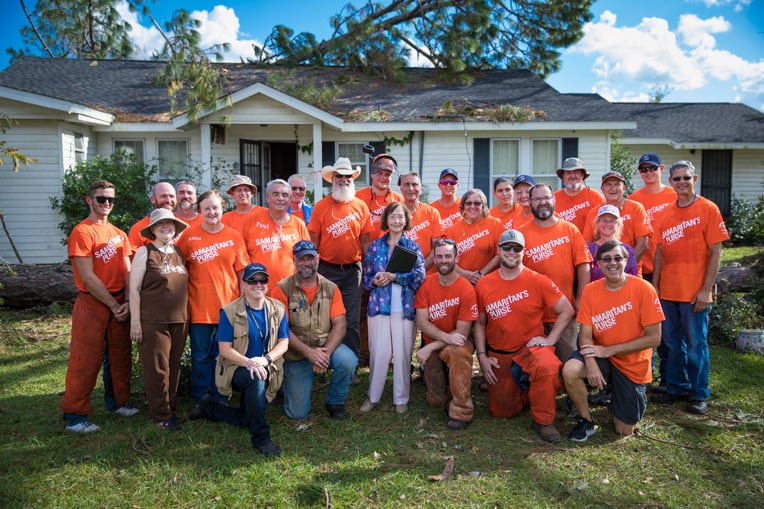 Vera Rozier gathers with the Samaritan’s Purse volunteers who helped clean up her yard and house.

When an assessor arrived at her home and promised to send volunteers to help, she had hope. She knew that the Lord promised to take care of her, and now she was seeing that promise turn into a reality. The next day more than a dozen Samaritan’s Purse volunteers descended on her property—clearing downed trees, removing debris and helping her pick up the pieces. It was finally starting to look like home again.

“It’s almost unbelievable that people would have such great hearts to come in and help other people,” she said. Their selfless service reminded her of the example Jesus set by helping those in need. While the physical work was important, it was the spiritual ministry that impacted Vera the most. She knew it was about more than clearing trees, and she treasured every encouraging word and heartfelt prayer. Vera saw God’s light shining through the volunteers.

“It makes me feel loved and cared for. I know I’m not in this world by myself,” she said.

Next, Vera hopes to gather her children and grandchildren around her kitchen table for Thanksgiving dinner. She wants them to enjoy a delicious meal, but more importantly she wants them to praise God and recognize that He is their ultimate Sustainer.

Samaritan's Purse is ready to respond at a moment’s notice whenever and wherever disaster strikes. We specialize in meeting critical needs for victims of conflict, natural disaster, famine, and epidemics throughout the world, often working through local ministry partners to do so. We provide emergency food, water, shelter, medical care, and other assistance in the Name of Jesus Christ.
Top Stories
Deploying an Emergency Field Hospital to Turkey
Franklin Graham Visits War-Torn Ukraine with 200 Millionth Shoebox Gift
Planting Seeds of Faith in Famine-Scarred Niger
Safe Water Comes to Remote Villages in Kenya
Makenna's Story of Hope
© Copyright 2023 Samaritan's Purse Canada. All rights reserved.