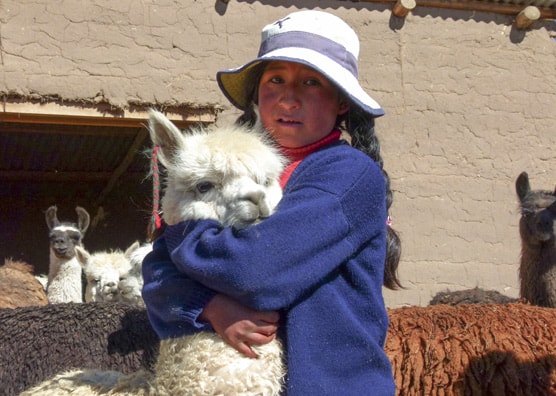 Families’ lives are changing because of resources, training, and the Good News that’s provided by Samaritan’s Purse donors.

There aren’t many career options in rural Bolivia. Most people raise crops and animals for a living, but even doing that is difficult because of unpredictable weather and scarce water. When crops fail and food shortages result, families often depend on their hardy llama herds for survival.

The only problem is that sometimes their herds aren’t so hardy. Despite being one of the principal economic activities in the area, llama farming has had next to no support in terms of training, veterinary services, or market access. Many farmers’ animals have been getting sick and dying off, contributing to the region’s 97 per cent poverty rate.

But recently, Samaritan’s Purse partnered  with local farmers to bring about change. Your donations accomplished amazing feats, including restocking sparse herds, providing vital veterinary training, and even supporting a meat processing center through which farmers can access markets.

The success of this project wouldn’t have been possible without generous Canadians like you, or committed Bolivians like Daniel Collo.

Through our project, Daniel was trained to be a ‘veterinary promoter’-someone with basic training in animal health who can identify sicknesses, prepare and administer de-worming medicines, and pass on his knowledge to other farmers.

“I love what I do,” says Daniel. “I feel happy assisting a sick animal. I feel even happier when it recovers.”

Not only does his punctuality and conscientiousness make him the most requested veterinary promoter in his area, but Daniel’s dream is to one day offer even more support to his fellow llama farmers by becoming a vet technician.

“I always dreamed of studying agronomy or veterinary medicine, but I couldn’t. Now I have the possibility of fulfilling my dream and, with God’s will, I would love to have a store that sells agriculture and veterinarian products.”

His aspirations have even inspired the next generation. One of his daughters recently graduated from a post-secondary veterinary program.

“If I hadn’t studied veterinary promotion and received training, I don’t think my children would have been interested in going to college,” Daniel says. “That is why I thank God for Samaritan’s Purse’s project. Thank you so much for your help.”