Ian MacKay on potential for Ebola outbreak in Canada: 'We've got education behind us' 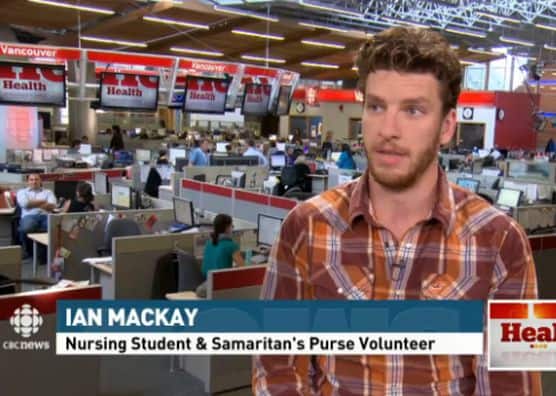 Written by CBC News
Published by CBC on Wednesday, October 1, 2014

A 23-year-old B.C. nursing student who was trying to help contain the spread of the Ebola virus in Liberia says Canada is far better equipped to handle an outbreak should it ever come here.

“We’ve got education behind us. We’ve got the resources out there to educate us on the virus and the symptoms that go along with it, and most of all, we have the infrastructure to contain it,” Ian MacKay told the CBC’s Andrew Chang on Wednesday.

The risk of an outbreak in North America is low, and so far there has been just one case detected, in Texas.

Public health officials say people arriving in Canada from affected areas are being screened for flu-like symptoms, and isolation wards at hospitals are ready to take in patients if needed.

Ebola in B.C: Risk low, but some infections expected
But following proper precautions to limit transmission can be tricky, as MacKay found out when he was in Liberia with the Christian aid group Samaritan’s Purse. Less than three weeks into his trip, two Americans working at the same clinic, Dr. Kent Brantly and Nancy Writebol, contracted Ebola.

“I did know them personally, so when they got sick, that’s when things really got real for us,” MacKay said.

MacKay, who witnessed people dying from Ebola in Liberia, said he knew what might be in store for his colleagues and even for himself-and the prognosis is often grim.

“There’s nothing nice about this Ebola virus. It’s absolutely horrendous-the toll it takes on the human body,” MacKay said.

“From start to finish, it robs the patients of everything. Their families, their communities-the stigmatization that goes with the Ebola virus. It was absolutely horrible being able to see it first-hand.”

Brantly and Writebol returned to the U.S. to seek treatment and recovered. MacKay came home to Canada, where he says the health-care systems, free from the legacy of decades of civil war, work together and a patient’s outlook is much better.