'I hope you keep doing this' 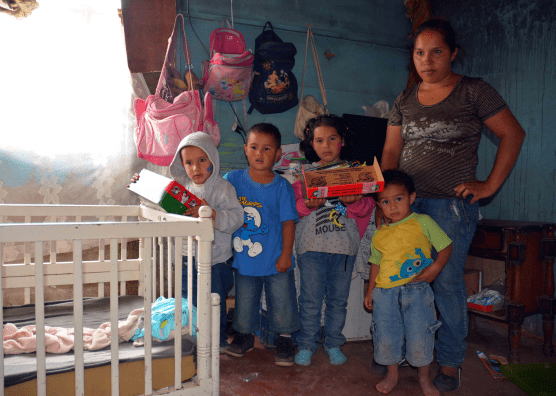 It’s a huge understatement to say that life is a struggle for 22-year-old Katherine Madrigal Calvo.

A mother of three, she lives with her parents in a tiny apartment made of concrete blocks and corrugated steel in a slum in Costa Rica. Several months ago, her husband abandoned her and the children. Then the interior of their unit was gutted by a fire set by a mentally unstable relative.

Now, six people are trying to survive in the heavily damaged apartment, with its lighting limited to only three bare bulbs, and only donated furniture. Their clothing, also donated, is everywhere-including in the dark, dismal kitchen. And their toilet doesn’t work, adding to the family’s daily misery.

“It’s hard for me, but my kids and the Lord are my strength,” Katherine says bravely.

Katherine’s father, 45-year-old Gerardo, is struggling to rebuild the apartment’s interior walls. He’s doing the best he can, but Gerardo has epilepsy. Government-supplied medication is helping to control it, but last year he had to spend a month in hospital after being hit by a car during a seizure.

He does gardening work to earn an income, but times are so difficult that he has sometimes begged for money. Gerardo breaks into tears as he tries through an interpreter to tell visiting Canadians about his life.

Gifts of any kind for the children were simply a fantasy for Katherine and her parents-until five-year-old Kristel and four-year-old Brandon were invited to an Operation Christmas Child shoebox distribution event at a nearby daycare center.

Kristel and Brandon received boxes filled with toys, school supplies, and hygiene items. They were also invited to attend The Greatest Journey, Samaritan’s Purse’s 12-lesson evangelism and discipleship course. There, they will learn that “God shows his love for us in that while we were still sinners, Christ died for us” (Romans 5:8, ESV).

“These shoeboxes are really beautiful because my children don’t get anything,” said Katherine. “I thank Canadians a lot. God bless you and I hope you keep doing this.”