Hope returning after bushfires in Australia 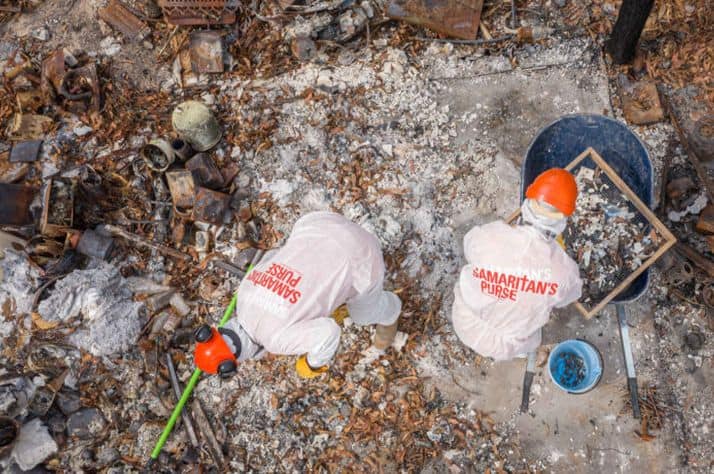 Samaritan’s Purse volunteers provide relief to a New South Wales man after he lost everything in the bushfires.

Winds roaring like a jet engine woke Ean Newell in the dead of night just days following Christmas. Flames licked the tops of the trees on the horizon surrounding his Mogo, New South Wales, home and the resulting heat rose exponentially as the blaze barreled toward him with shocking speed.

“I saw [the fire] coming up the hill there and everything started catching on fire, and I knew then that I had to get out. It was unstoppable,” said Ean.

Ean is one of dozens of homeowners that Samaritan’s Purse is helping recover from the devastating bushfires that have swept across Australia—destroying entire communities and displacing thousands of families.

Though Ean spent days clearing his property in advance of the widespread bushfires, the effort proved futile as everything around him quickly turned to ash. Knowing there was nothing he could do but leave, Ean grabbed three things—a saddle, a photo album, and a Bible. Though he is not particularly religious, he felt drawn to grab the Bible as he left.

“I had stacks of historical books that I could never replace and I left all those and picked up a Bible,” Ean said. 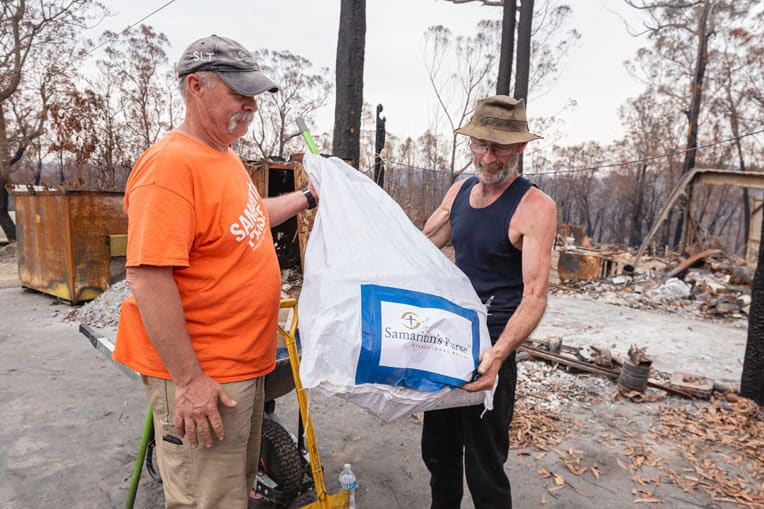 Placing the items in a backpack, he fled to his neighbor’s house where he and four others defended the property with a limited water supply. Still, as he dampened the land around him, Ean watched as fire consumed his home and 40 years of tools, equipment, and memories just a few hundred yards away.

“I didn’t really have a lot of time to think about it; I saw [my house] go up and I knew everything was going and I would never see it again,” Ean said.

Instead, he focused on defending the home he was in and the lives of those he was with. “We didn’t have time to panic,” Ean said. “The five of us who were next door had to get our heads into gear and just concentrate on what we were doing to survive.”

With a shift in the wind, the fire continued to forge ahead—sparing the home but leaving everything surrounding it scorched and unrecognizable.

As Ean returned in the days following the firestorm, he found years of projects and tools scattered amidst the ashes of his home he built 22 years prior.

Hesitant to receive outside help, Ean did accept a Samaritan’s Purse Fire Recovery Kit stocked with a shovel, rake, Tyvek suit, gloves and other tools necessary for him to bounce back from the flames. The kit helped replace some of the key tools lost in the fire that would help him begin the recovery process. Thankful, Ean continued to hear a voice telling him to “go for it” and agreed to allow Samaritan’s Purse volunteers to come to his property to help him recover from the bushfires. 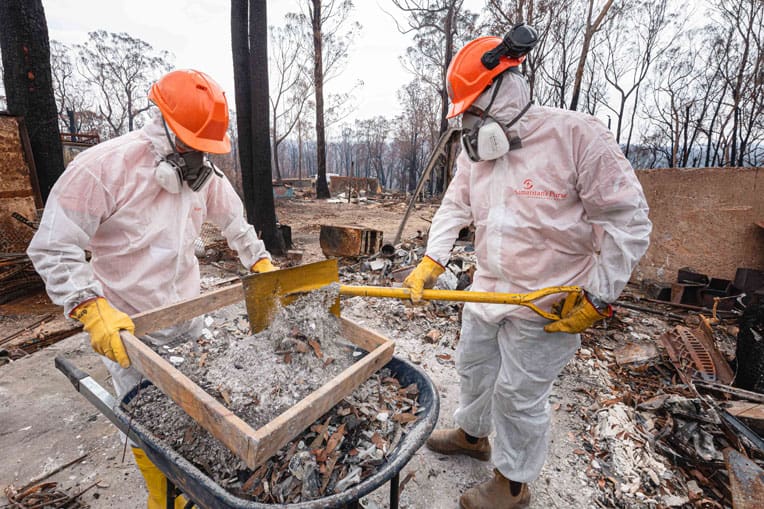 Within a week following the terrible blaze, Ean noticed small signs of hope—for him and for the now charred wilderness in which he once sought refuge.

Bright green buds pepper the sides of the blackened tree trunks and small blades of grass emerge from the scorched dirt—a powerful image of persistence and hope following tragedy. 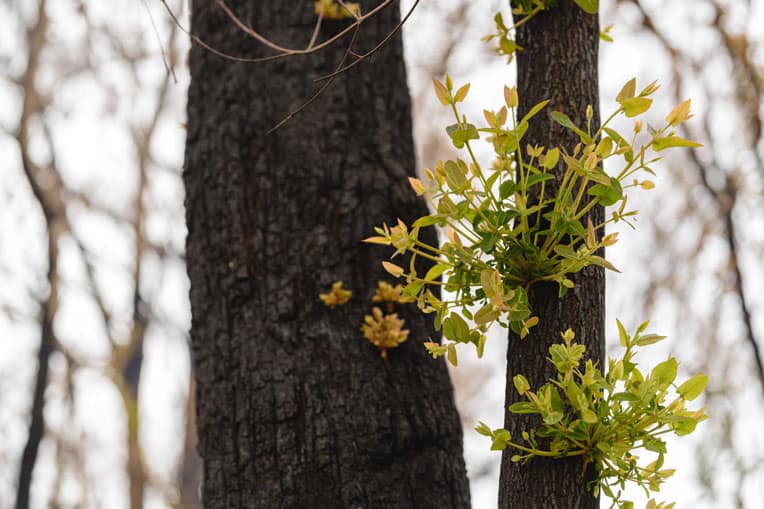 Signs of life are springing from charred trees.

“They’re all new growths so the tree can go on while it’s recovering,” Ean said.

After the fire, Ean was desperate, struggling with the mental and physical darkness surrounding him. But he began to find great comfort in the presence of the Samaritan’s Purse team.

“We come alongside people that are in need, people that have suffered a loss, a trauma, or tragedy and we want to help them in Jesus’ Name,” said David Ingram, executive director of Samaritan’s Purse Australia and New Zealand. “That’s really what we do and it’s our burden and our passion and our mission. So, when we heard about the bushfires starting in September, we wanted to mobilize our team.”

Samaritan’s Purse volunteers from across Australia and Canada removed dozens of downed trees from Ean’s property and helped clear a path through the metal that now littered his yard. Additionally, they located an area where Ean’s most prized possessions once were stored and sifted through the ash in an attempt to salvage anything that survived the flames.

“We come alongside people that are in need, people that have suffered a loss, a trauma, or tragedy and we want to help them in Jesus’ Name.”

While volunteers recovered his silver and childhood mementos from the rubble, Ean was most thankful for their presence with him day after day.

“You’ve actually lifted me in my attitude. I was getting a little bit depressed—I was out here by myself,” he said.

Ean knows that encountering Samaritan’s Purse in town that day was far from a coincidence. “I really firmly believe that there is no such thing as coincidence—there is design behind everything and I think this is an example,” Ean said. 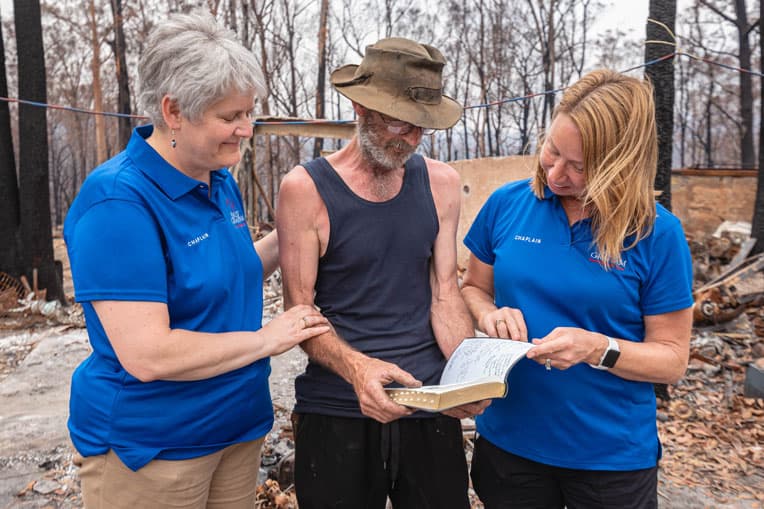 As volunteers helped to meet Ean’s physical needs, Billy Graham Evangelistic Association chaplains shared with Ean that this design is orchestrated by a greater Designer that only “works in good.”

“I’ve realized that you can lose everything but I’ve met really good people out of this disaster. It’s meant that I met you,” Ean said to Samaritan’s Purse volunteers. “I probably got even closer to my kids and a lot of other people and it’s just made me realize that the superficial things in life don’t really matter. There are more important things.”

The Billy Graham Evangelistic Association chaplains presented Ean with a Bible signed by all of the volunteers that had quickly become like family. “It’s hard to say thank you in a big way because I really don’t know how to describe it—what you’ve done for me,” Ean said. “You guys have done more than anybody else—you’ve been my little angels—just for moral support too, just coming out here.”

Samaritan’s Purse continues to help families in Bateman’s Bay, New South Wales, and Bairnsdale, Victoria, recover from the historic bushfires sweeping through Australia. Please continue to pray for our teams as they help these homeowners in Jesus’ Name. 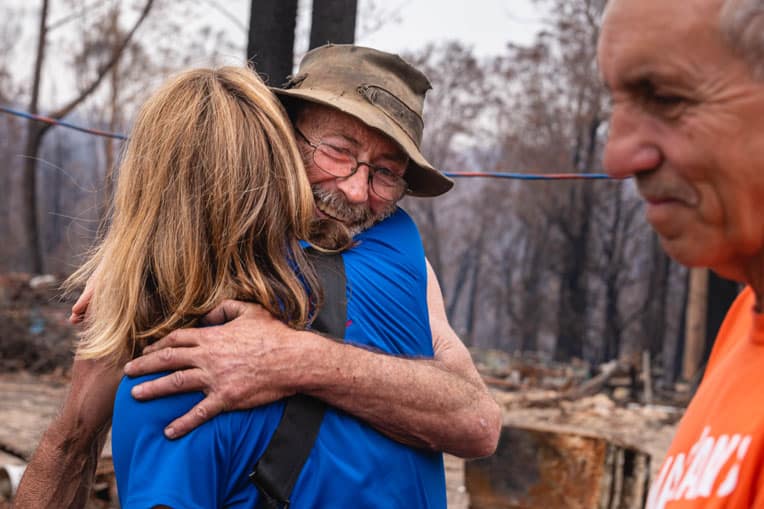 Please continue to pray for Ean Newell and other Australians as they seek to recover from the bushfire damage.