Grains give a Bolivian family a brighter future 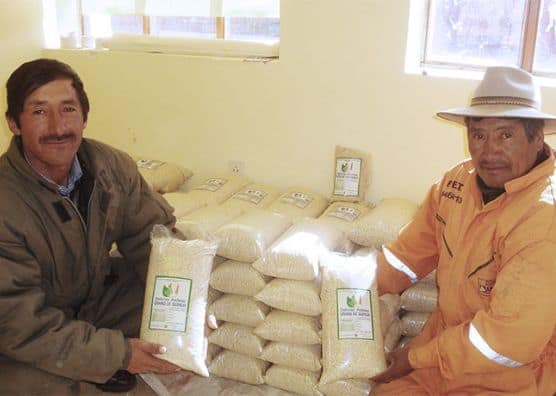 A father saw few options to provide for his family, but everything changed when he took a step of faith and joined a Samaritan's Purse agriculture program.

RenÃ© Humerez made his living mining limestone. The extremely strenuous job took a toll on his health and paid very little. With six children to feed-all younger than 12-RenÃ© struggled to stay afloat. He knew he wouldn’t be able to continue in such bleak conditions for the long-term.

Three years ago, at the age of 42, RenÃ© decided it was time to find a better job. But the employment opportunities in his area were few. To make matters worse, he didn’t have a degree or any marketable skills.

About that time the Andean Grain Producer’s Association, started in conjunction with Samaritan’s Purse, was opening a collection and processing center in Bolivia’s highland region, where the Humerez family lives.

A high percentage of Bolivia’s poor are indigenous farmers from the highland region, and Samaritan’s Purse works within the local communities to improve agricultural production.

Like similar centers we have helped start in the country, including one for llama farmers, this center would gather products from individual farmers, process them collectively, and commercialize them through formal markets. This allows individual farmers to increase their production by securing avenues that would be impossible for them to access independently. The results often vitally impact families and communities as a whole by decreasing poverty, improving health, and providing better quality of life. 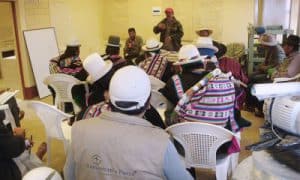 RenÃ© thought it might be an opportunity to supplement his low salary with a little farming. Not knowing quite what to expect, he contacted Samaritan’s Purse, expressing interest in becoming a partner in the Association.

His request was granted, and RenÃ© immediately began participating in our workshops. He learned about the production, collection, and storage of Andean grains such as quinoa and caÃ±ahua, as well as quality control, marketing, business plans, and other key topics necessary for success in the industry. His interest in farming ignited.

Shortly after, RenÃ© was elected president of the Association. From that point on, he was able to leave his mining job, and he and his family devoted themselves fully to the production, collection, processing, and marketing of organic quinoa and caÃ±ahua grains.

As a result, the Association signed a significant agreement with the municipal government to be the primary grain provider for a school feeding program. Between 2011 and 2012, the Association sold a total of 32,017 pounds of processed quinoa and caÃ±ahua grain. The farmers were also able to sell 7,280 pounds of caÃ±ahua for export to Europe.

The next year’s  efforts were equally successful. Some of the quinoa was also being sold locally in the form of bread and cookies.

The Association’s directors and partners are grateful for this opportunity, which has allowed for a much-needed economic boost. RenÃ© also conducts training for members of the association. The  role has given RenÃ© a way to continually provide for his family without having to compromise his health. He also has more time to spend with his wife and children.

Above all, joining the Association has led RenÃ© to reconciliation with Jesus Christ. Sharing the Gospel  is a key component of the program, and after one of the Samaritan’s Purse training sessions, RenÃ© recommitted himself to the Lord.

Today, he shares God’s Word with his co-workers and lives as an example of the love and mercy of Christ.