Shoebox gifts are opening doors for a church in Mongolia to start fellowships of new believers in neighboring villages. 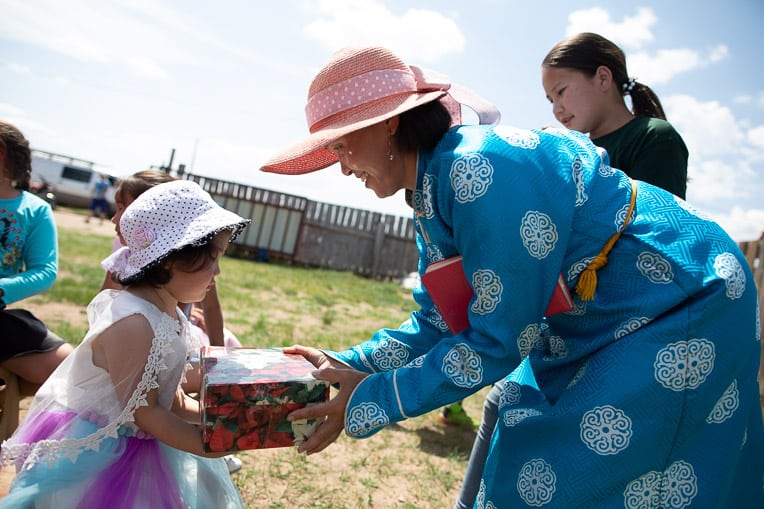 Tumee Shirbazar (right), a leader in the church in Batnorov whose name means “a billion blessings,” offers a shoebox gift to one of the children in her community.

Batnorov, Mongolia, is home to only 5,500 people, though an incredible 400,000 head of cattle graze here. Located closer to Russia than the country’s capital of Ulaanbaatar, it is known to Mongolians as the birthplace of Ghenghis Khan’s best friend, Boorchi. However, it’s not because of cows or famous friends that there’s been celebration in heaven (Luke 15:10) over this area in recent years. It’s because nearly two dozen people have come to faith in Jesus Christ.

A church formed in Batnorov after a congregation in the neighboring village of Berkh brought Operation Christmas Child shoebox gifts and the message of the Gospel to this Buddhist area.

Enkhjargal Gombosuren, the lead church planter, said, “When I planted a new church, the greatest tool and support was the Samaritan’s Purse Operation Christmas Child project.”

YOU CAN BUILD A SHOEBOX ONLINE

From Shoebox Gifts to a Yurt Church

A few years ago, Enkhjargal had asked the Batnorov school principal Taivanjargal Gombosuren for permission to give shoebox gifts to the schoolchildren. Taivanjargal agreed and welcomed the members of the church in Berkh to their recreational hall for a special ceremony.

Aynagul Akhai, a part of the delegation from the church, remembers that many parents came along with their children and asked, “Why are you giving away free gifts?” 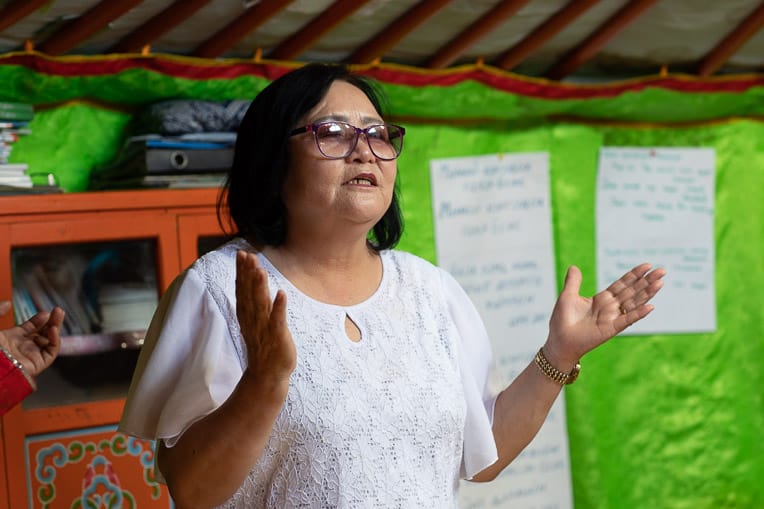 When Enkhjargal Gombosuren planted a church in Batnorov, she said, “the greatest tool and support was Samaritan’s Purse Operation Christmas Child project.”

She gladly explained that the shoebox gifts “came through prayer to show God’s love” as they shared the message of the Gospel of Jesus Christ.

Recalling the parents’ reactions to these boxes overflowing with toys, school supplies, and hygiene items, she said, “What really struck them was that the kids always found in the box what they always wanted.”

Taivanjargal agreed. “Each box was packed in a different way,” he said. “The shoeboxes really touched children’s hearts and the adults who attended were so impressed.”

In addition to the Operation Christmas Child outreach event, members of the church also shared a Gospel film. Through these combined efforts, around two dozen people came to faith and began to be discipled as they met together weekly to study God’s Word in a Mongolian yurt. They are among the estimated 36,000 believers in a nation of 3 million people.

This is one of three churches in Khentii Province that the congregation in Berkh has started in part through Operation Christmas Child and The Greatest Journey.

‘A Good Way to Make Disciples’

On Saturdays following the outreach event, a team from the church in Berkh traveled 20 miles over rough gravel roads to Batnorov to host The Greatest Journey follow-up discipleship classes. These 12 Bible lessons helped the children grow as disciples and young evangelists.

“The Greatest Journey gives great joy to the kids,” Enkhjargal said. “It shows them how to know God.” 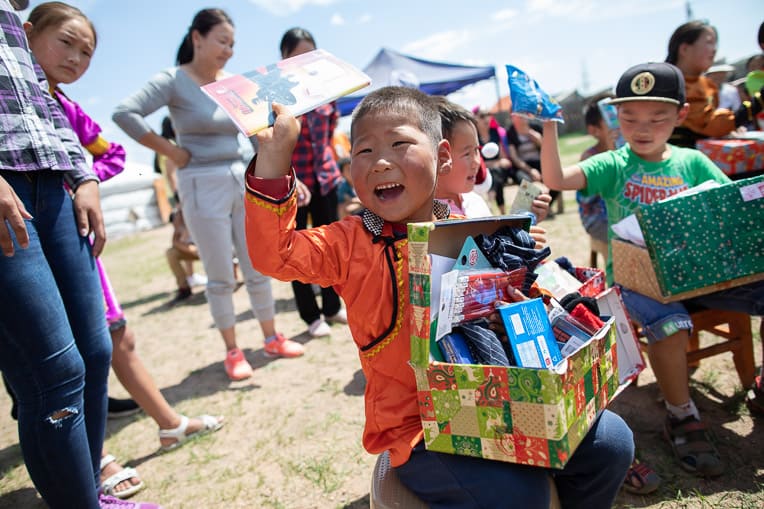 Six-year-old Khosoo delights to find a journal amid all the treasures in his shoebox gift.

While the course is designed specifically for children who receive shoebox gifts, it greatly influenced the life of the entire church in Batnorov.

“The Greatest Journey classes were a great boost to our youth ministry,” Enkhjargal said. “Receiving a shoebox is great but what is better is to share the truth of the Gospel with family and friends.”

Shoebox recipients learn how to do just that when they attend this course. As they share the Bible stories they learn in class, others trust in Christ and add to the numbers of the church.

An Open Door for the Gospel

This past July, a team of youth and adults from the church in Berkh hosted another shoebox outreach event for the children of Batnorov, eight years since the first distribution there. 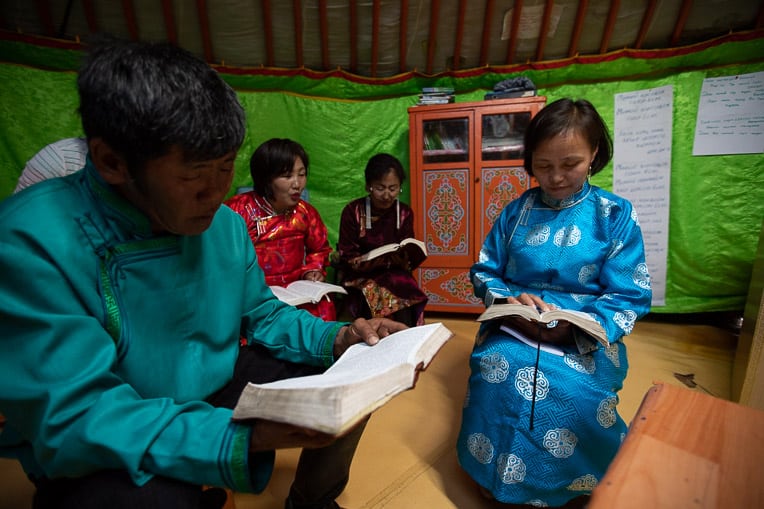 A church in Batnorov, Mongolia, that was planted in part through shoebox gifts meets in their yurt for a prayer meeting.

Ten-year-old Odmyagmar rejoiced to receive his shoebox full of surprises, but hearing Scripture stories was his favorite part of the event.

“People killed Jesus when he had no sin,” he said. “He resurrected in three days.”

This made such an impression on him that he received Christ into his heart.

Today Taivanjargal, the former principal, serves as the governor of the district and applauds the benefits that Operation Christmas Child brings to his area.

“Personally, I wish that more children were involved in church ministries,” he said.

To those who pack shoeboxes and support The Greatest Journey, Munguu said, “Please know that the gifts you are sending reach the neediest children. Without you and your support, the door wouldn’t be open.”

She is encouraged that Christians around the globe join in the responsibility of sharing the Gospel of Jesus Christ with the people of Mongolia.

Enkhjargal added, “Even though we live in different countries and different continents, we belong to one family and one God. Thank you for reaching out to Mongolians.”

Be a part of blessing children around the world by prayerfully packing a shoebox. While National Collection Week was Nov. 12-18, 2018, you can still pack and send shoeboxes online. 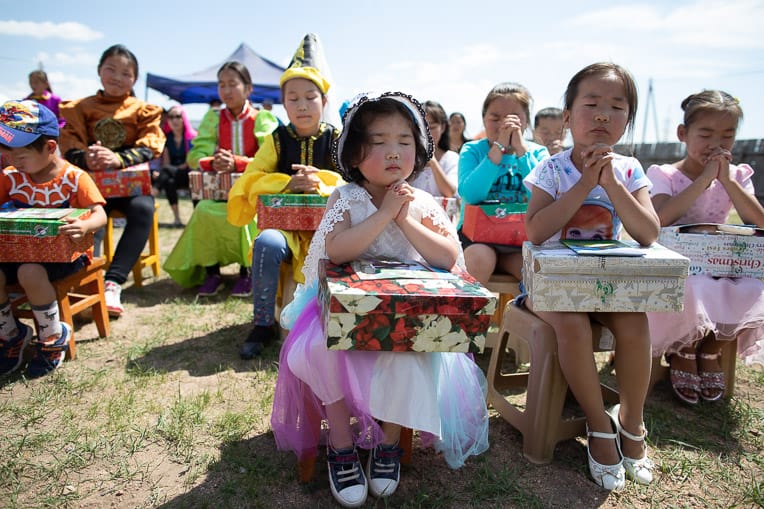 Children in Batnorov pray before opening their gift-filled shoeboxes.