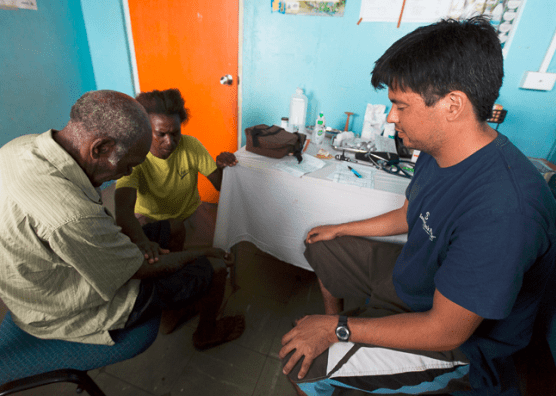 May, 2015—Words can’t express what went through my mind when I first saw the devastation in Tanna. Coconut trees were knocked over like bowling pins. Big, ancient trees were uprooted and lying defeated on the ground. This place could be called The Island of Broken Sticks. Most of the houses were damaged or destroyed.

And yet I didn’t have to look far to see God at work. The people were still worshipping their Savior with outstretched arms, still praying, still being hospitable to groups such as ours from foreign lands, and still sharing joy despite losing everything.

I think God has a special concern for people in difficult circumstances. He has particular concern for the poor, as evidenced by the many references in Scripture commanding us to help the destitute and the needy. Whatever we do to the least of these, we do to Him (Matthew 25:40).

However, I witnessed another dimension of God’s care and concern for these people that I had never experienced with such consistency before.

This all started during breakfast with carpel tunnel syndrome. One of our staff members was complaining that it had bothered her for years. I offered to pray for her. She accepted. We prayed. And she got better. All of this took place at the breakfast table.

I then reasoned that if God would do that for her, why wouldn’t He do that for our patients? After all, we were going to see many people with chronic back pain, chronic knee pain, and chronic shoulder pain. We could give them advice and some pain relief, but that was about all. They live physically demanding lives, which became all the more difficult following the cyclone. And nothing we could do would fix that.

So I decided to try prayer. At our mobile clinic (held in a school), my translator and I first prayed for a lady in her 40s who had experienced knee pain for a few years. Then we asked her to bend her knee. No pain. We got her to walk. No pain. She had a big smile on her face and couldn’t help but praise God. She was already a believer, and we prayed again while she poured out thanksgiving.

And so it continued. It didn’t matter who did the praying, how eloquent, charismatic, stuttering, or brief the prayer was or even how confident the person offering the prayer was. We continued to see God answer prayer and see people be miraculously healed.

I don’t know why we saw a spate of miraculous healing at this time and I can’t speak for God. But I believe He wanted to show the people of Vanuatu that He understood their needs and wanted to show compassion on people who had lost almost everything. After a month here, we saw God working all things out for the good of those who love Him, but His working in this way stood out to me the most.

Cyclone Pam hammered Vanuatu with winds up to 185 mph (308 km/hr) and torrential rain. At least 11 people died, houses were destroyed and destruction was  widespread. Samaritan’s Purse arrived in Port Vila, the capital of the impoverished nation, in the immediate aftermath of the storm.