From Millbrook to the Philippines: In the wake of Typhoon Haiyan 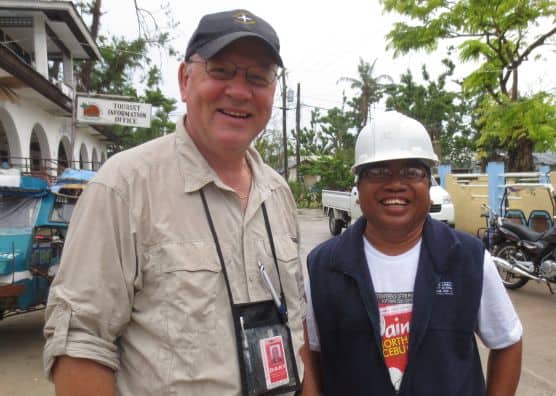 Millbrook resident, Steve Elliott, shares about volunteering with Samaritan's Purse and going to help with Typhoon Haiyan in the Philippines.

At Steve and Laurie Elliott’s house in Millbrook, the Christmas tree and decorations will come down this week, just ahead of Valentine’s Day. Laurie quips, “Maybe we should just leave the tree up and switch the decorations for hearts!”

The tree is still up because they have, just in the past week, been able to celebrate Christmas together after Steve’s return from a two month assignment in the Philippines as part of a Disaster Assistance Response Team (DART) sponsored by Samaritan’s Purse, a nondenominational evangelical Christian organization that has been providing spiritual and physical aid to hurting people around the world since 1970.

On November 8, Typhoon Haiyan swept through parts of the Eastern and Central Visayas Province of the Philippines, with 270 km/h sustained winds and a storm surge seven metres high that caused widespread flooding, killing thousands of people, flattening villages, destroying homes, and livelihoods. By November 15, a Boeing 747 from Samaritan’s Purse, carrying 100 tonnes of medical equipment and emergency supplies was on its way to Cebu City in the Philippines, and from there the supplies made their way to Tacloban on Leyte Island, the first major city to be hit, and to other areas of devastation.

Steve Elliott, whose provincial Emergency Management Ontario van was, until recently, a familiar sight outside his home on King Street just west of the Post Office, has a career’s worth of experience in responding to emergency situations. As an emergency management advisor, liaison officer, and recovery specialist, Steve has been on the ground numerous times across the Province, often in flooded northern First Nations communities, as part of a team overseeing emergency response and recovery planning. Stepping down from his position with Emergency Management Ontario when he decided to retire didn’t mean stepping away from his commitment to help others. He offered his knowledge and expertise to Samaritan’s Purse, not knowing that he would hear the call to be part of a relief effort on the ground within months.

The northern Ontario experiences did not prepare Steve for the oppressive heat that met the team when they arrived. It was winter in the Philippines too, but a cool day usually meant temperatures hovering between 20 and 25 degrees, with average temperatures usually around 28 and in the warehouse where Steve was to spend weeks receiving, organizing, and shipping relief supplies, it was often well above 40.

The coordinating body for the relief effort is the United Nations, and each nongovernmental organization (NGO) is assigned an area. In the time that Steve was there, over 60 international workers with Samaritan’s Purse and the 300 Filipino nationals employed by them received, organized, and shipped out and distributed thousands of kilos’ worth of supplies, including 20,000 hygiene kits, 1,000 pallets’ worth of nylon-reinforced tarps for the emergency shelters, building, water, and medical supplies, and food. Tellingly, the staging area used for the SP operations was the compound of a battered resort on the outskirts of Tacloban. Portable sawmills and table saws went out to rural communities so that rough-hewn timber from coconut trees, stripped of their fronds by the typhoon, could be made into usable lumber for repair and reconstruction. With a shrinkage rate of up to 30 percent, Steve notes that coconut palm lumber is far from an ideal building material, but aid organizations work in the region with the supplies at hand whenever possible, paying farmers for their harvest of damaged trees.

Steve Elliott arrived in the Philippines on November 29. He describes what he, and others, saw in Tacloban as the closest thing to what he imagines a nuclear holocaust would look like. In that city, both the port and the airport were gone. There were whole towns and villages where only cement structures remained standing. Debris was everywhere, and to deal with it, people had swept what they could into piles for burning, casting a shroud of gray smoke over the landscape.

Steve’s first task, when he returned to Cebu City, was to make the SP warehouse an efficient resource centre. As he says, “Things were arriving fast and furious.” Safe storage and easy access were key: all the supplies were lifted onto pallets and moved into sections. Then, working with a team of seven from a half dozen countries, all there because of Samaritan’s Purse, Steve took on the role of chief of logistics in Cebu City, sitting down with each of the SP business unit leads in the disaster areas to establish what they would need in the months ahead as they moved from emergency response to long-term restoration planning.

However, disaster relief was still very much in the forefront, and so it was that Steve found himself, on New Year’s Eve, waiting for the tide to rise on Bantayan Island so that he and his team could cross the Tanon Strait to bring a supply of rice to the tiny island of Doong. The UN World Food Programme and the US Agency for International Development (USAID) had approached Samaritan’s Purse to contract them to help with distribution of rice. So it was that, as midnight approached, Steve and his crew, with the help of barge hands, helped load two hundred and seventy-eight 50 kg bags of rice onto the small barge that took them over to the island. They were met by relieved families in the early morning, who welcomed them with flashlights, broad smiles, and heartfelt thanks. Every family received a month’s supply of rice. Here the sole mode of income is fishing and, in the aftermath of the typhoon, all the fishing boats had been destroyed or badly damaged. Samaritan’s Purse has undertaken to repair 40 of the fishing boats and replaced 10 more. It is a Christmas story indeed.

Steve is back on home soil now, thankful to have escaped Dengue fever-six of his colleagues were not so lucky. The task at hand now is to organize his experiences and observations into a presentation. It was his good fortune-he sees God’s hand at work in this, he says-on his way home at the end of January, to be introduced to the Filipino Consul General posted to Toronto as they awaited their flight in Manila airport. From their conversation came an invitation to highlight the relief efforts of Samaritan’s Purse after Typhoon Haiyan at the Philippine Festival in June before an audience of 24,000 people. Using his logistics, communications skills, and training, Steve will work with SP Headquarters Communications staff so that the story can be told.