Franklin Graham in Bangladesh to see work with Rohingya refugees

Franklin Graham met Wednesday, Jan. 31, with Rohingya refugees to hear their heartbreaking stories and share with them the hope of Jesus Christ. 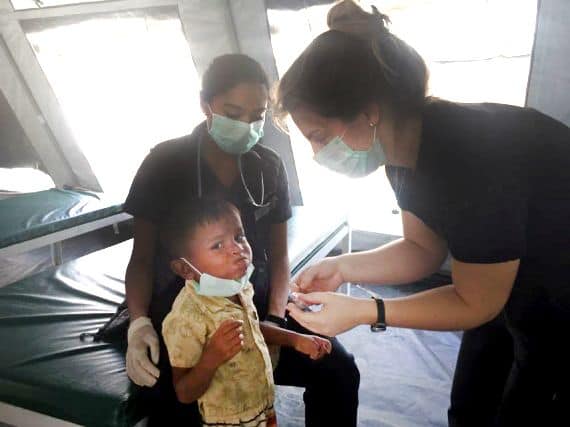 “God loves you,” Graham told a crowd that flocked to him Wednesday morning when he visited the vast Kutupalong camp in southern Bangladesh.

“He sees your suffering. We pray that He will intervene for you. I come from America. I’m a Christian. But we care for you. We love you. We want to be able to tell the world what is happening here.”

One after another, the Rohingya told Graham how their family members had been killed, their land seized, and their homes and villages burned as they fled from waves of attacks that began last August in neighboring Myanmar.

Now, more than 650,000 Rohingya live in the barren hills of Kutupalong, where bamboo houses are stacked on steep hillsides, and dirty latrines stand next to wells. The conditions are appalling, but the Rohingya said they have no choice but to stay here. They fear they will be killed if they return to Myanmar, where they have no rights. Essentially, these are people without a country.

“God loves you. He sees your suffering.”

Standing on a sandy hilltop, Graham looked out across endless waves of makeshift houses that stretched to the horizon. “This used to be a national forest, with elephants and wild animals,” he said. “Now there’s hardly a bush left,” because it has all been stripped for firewood and building materials. He expressed grave concern about what might happen to the camp in the rainy season, which begins in April. Then the Rohingya will face dangers ranging from landslides to cholera.

“These are Muslims,” Graham said. “This is an opportunity for us as Christians to let the light of Jesus Christ shine before them.” 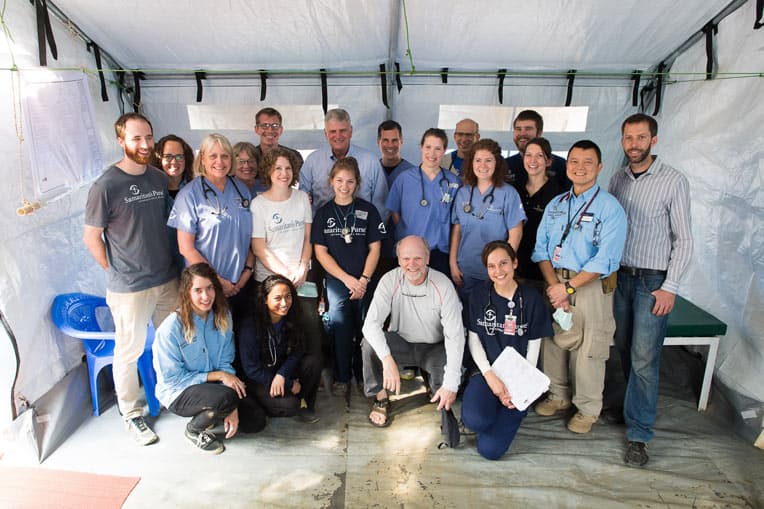 Our staff at the Diphtheria Treatment Center hail from several nations. Franklin Graham encouraged them by his visit on Jan. 31.

Graham also saw the diphtheria treatment center in the camp that was built by Samaritan’s Purse. It is staffed by doctors and nurses we have sent from the United States, Canada, and the United Kingdom.Before arriving none of them had ever seen a case of diphtheria, which has been eradicated in much of the world. But the Rohingya have not been vaccinated for diphtheria, and there have been over 4,600 cases reported in the camps. Nearly 500 of those patients have been treated by Samaritan’s Purse.

Later in the day, Graham led a team from our Operation Christmas Child project to hand out gifts to 1,200 Rohingya children living in a smaller camp called Chakmarkul. In the same place where their parents line up to receive food and other assistance, the children lined up to receive backpacks that contained soccer balls for boys, dolls for girls, as well as T-shirts, toothbrushes, and sweets.

Graham said that Samaritan’s Purse hoped to send Operation Christmas Child shoebox gifts to the Rohingya children, but were unable to do for logistical reasons. Instead, our church partners in Bangladesh were able to assemble the gift bags locally. Thousands more will be handed out in the days to come. “We feel like it’s important to do something for these kids who have lost everything,” Graham said. 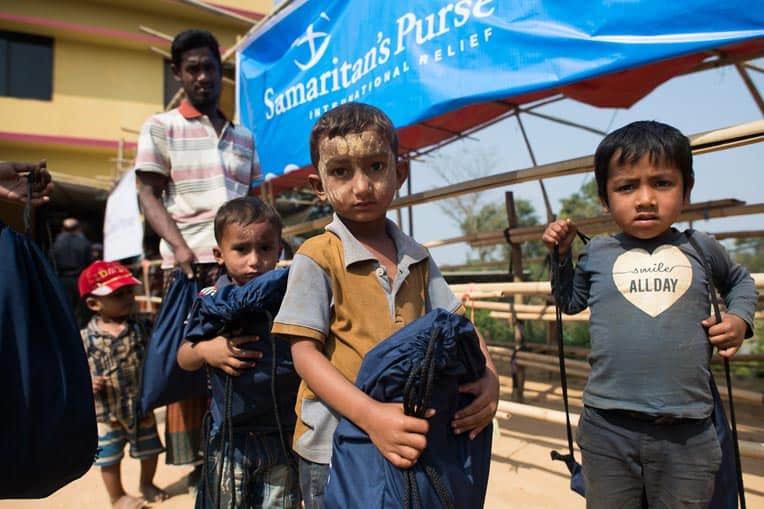 These little boys were among 1,200 Rohingya children who received gifts on Wednesday, Jan. 31. Most kids lost nearly everything during their journey from Myanmar to Bangladesh. 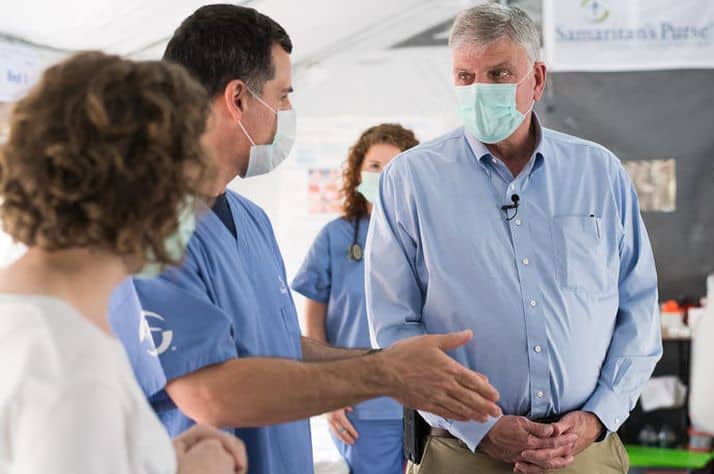 On Tuesday, Jan. 30, Graham saw two busy wards at Memorial Christian Hospital that were recently built and staffed by Samaritan’s Purse to care for Rohingya who need advanced surgical care. Such treatment is not available anywhere else in southeastern Bangladesh. He also pledged funds to help complete a new state-of-the-art hospital facility that is already under construction. The new hospital will have eight operating rooms and the only CT scanner in an area that is home to 17 million people.

“It’s going to be modern, up-to-date, first-class,” Graham said. “Bangladesh has about 160 million people in a place the size of Illinois. It’s one of the most densely populated areas of the world—about 32,000 people per square mile. This is a lighthouse, right here in the middle of this part of the world that is dark, a part of the world that’s seen a lot of tragedy.

“God’s got this hospital in the middle of all this, proclaiming His Name.” 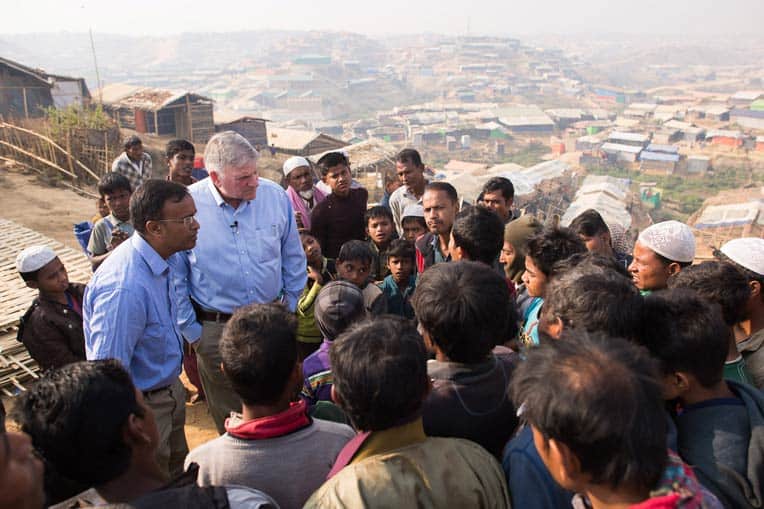 Graham met with Dr. Stephen Kelley, a surgeon who is the medical director of Memorial Christian Hospital. “For the last five months, we’ve had a unique opportunity to be thrust into the middle of what may be the earth’s largest humanitarian crisis,” Dr. Kelley said. “When this crisis started in August 2017, we needed more bed space. With the assistance of Samaritan’s Purse, two months later we had 48 additional beds to be serving the Rohingya people.”

The sudden influx of patients required additional doctors, nurses, and other medical personnel that Samaritan’s Purse has sent on short-term assignments.

Dr. Kelley said that the staff at Memorial Christian Hospital have prayed for years that they would have an opportunity to reach the Rohingya and share with them the hope of the Gospel of Jesus Christ. That time has come.

“We’re at the point of the spear, with the thrust of Samaritan’s Purse behind us,” Dr. Kelley said.

The Rohingya patients often arrive with wounds caused by gunshots, wildlife, and roadside accidents—all perils for families who have had to flee for their lives and walk for days to reach safety.

One 10-year-old boy has spent the past month in the ward as doctors and nurses work to save his right leg, which was mangled in a roadside accident. The boy’s father (who saw his grandfather and brother killed as they tried to escape the fighting in Myanmar) has kept a bedside vigil and said he has been deeply impressed by the compassionate and expert care—and especially the prayers—that his son has experienced. “This has been more than I could have expected,” he said. 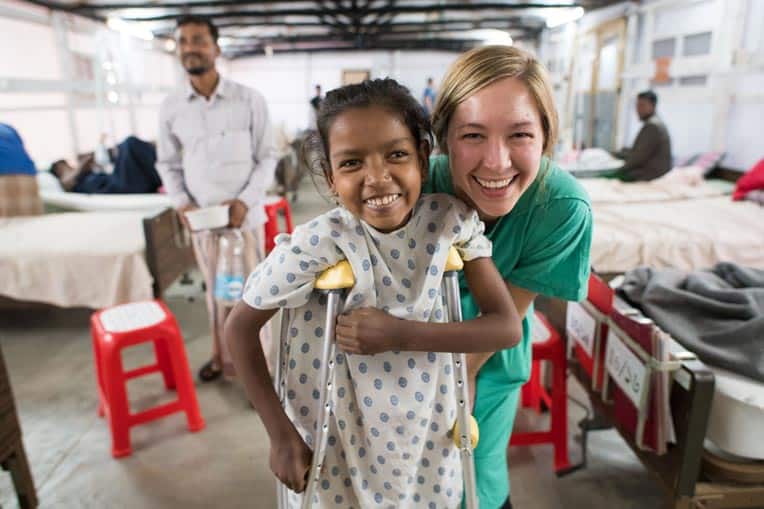 Erin Stephenson, a nurse serving through Samaritan’s Purse, smiles with her patient at Memorial Christian Hospital.