Fort McMurray fire victim exclaims: “You volunteers are our heroes!”

Samaritan’s Purse helped Grace and her family begin a new chapter after the Fort McMurray wildfire.

Grace has a story she’ll never forget. And thanks to generous Canadians like you, Samaritan’s Purse was there to help Grace and her family begin a new chapter. 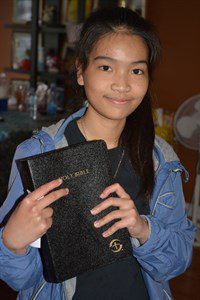 Grace, 20, and her family had to join tens of thousands of other residents of Fort McMurray, AB, who fled the northern Alberta city in early May 2016 as flames from a catastrophic wildfire burned more than 2,400 buildings.

When the evacuation order was called, Grace’s father, Romeo was at work. So after praying for every room of their home, Grace, her brother Francis, and mother Maria endured a nerve-wracking and congested 24-hour commute to Edmonton (a trip that normally takes about five hours) without him.

As they waited at an Edmonton evacuation center, Grace noted, “I saw many of my friends crying because they were separated from their families.”

Three days later, Romeo was able to rejoin his family. When they and thousands of other residents were finally allowed to return to Fort McMurray in early June, they found their neighborhood untouched by flames. But their fridge, weeks without power, was full of rotting food.

Hearing about the disaster relief offered by Samaritan’s Purse, Grace’s parents made contact and asked volunteers to move their now-useless fridge out of the house and to the curb for pickup. 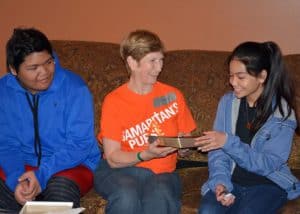 One of our volunteers gives a Bible to Grace after Samaritan’s Purse removed her family’s fridge filled with spoiled food.

With her parents back at work, Grace played host as volunteers in their familiar orange shirts struggled to fit the fridge through the front door.

“Aside from the firefighters and police, you volunteers are our heroes,” she told them.

Once the job was done, volunteers presented Grace with a Bible and prayed with her and Francis. She was clearly moved by the gift and prayers.

On May 3, 2016 Fort McMurray, Alberta was evacuated due to a massive wildfire that engulfed the city and region of 80,000. Over 2,400 buildings were destroyed in the fire. Residents have been returning since the evacuation order was lifted June 1. On July 6, the Alberta government announced the fire was under control. Samaritan’s Purse sent  staff and volunteers to  the area, to help meet  the physical needs of residents while sharing the love of Jesus.