Samaritan's Purse helped returning Fort McMurray residents do everything from search through their homes' ashes for salvageable items to remove fridges full of rotten food.

After an evacuation that lasted more than a month, Barbara and Mikolaj Zieleniewski were relieved to return to their home and find it undamaged by the catastrophic blaze that roared through the northern Alberta city of Fort McMurray in May and June.

However, thousands of undamaged homes had been without power for a month. As a result, the Alberta government advised everyone whose home had gone without electricity for any significant amount of time to avoid even opening their fridges and freezers: Just tape them up and drag them to the curb to be taken away. 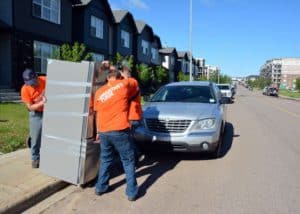 Samaritan’s Purse volunteers move a fridge filled with rotting food out of a Fort McMurray house to the curb for pickup.

Barbara and Mikolaj were among those residents and they took the government at its word.

“If I opened the fridge, I would have nightmares about the nasty food,” said Barbara.

Their fridge was too big and awkward to get out of the house without significant help. That’s where Samaritan’s Purse volunteers, in their orange T-shirts, came to the rescue.

The Zieleniewskis called municipal officials and were directed to Samaritan’s Purse.

They were surprised at how soon four volunteers showed up. Three volunteers swiftly removed the front door, then maneuvered the bulky appliance through the doorway and out to the curb. What would have been a daunting task for the Zieleniewskis was resolved in less than 30 minutes.

“I knew everyone was busy, so I didn’t think we were a priority,” said Barbara. “We were prepared to wait for a long time.”

Other than a vague awareness of Operation Christmas Child-the annual campaign which collects gift-filled shoeboxes from Canadians, then distributes them to children in the developing world-the Zieleniewskis had no knowledge of Samaritan’s Purse.

“You people are amazing-not just moving the fridge, but the prayer and feeling of compassion,” said Barbara. She spoke after the volunteers presented her and Mikolaj with an autographed Bible and prayed with them.

“This means a lot,” she added.

On May 3, 2016 Fort McMurray, Alberta was evacuated due to a massive wildfire that engulfed the city and region of 80,000. Over 2,400 buildings were destroyed in the fire. Residents have been returning since the evacuation order was lifted June 1. On July 6, the Alberta government announced the fire was under control. Samaritan’s Purse sent  staff and volunteers to  the area, to meet  the physical needs of residents while sharing the love of Jesus.