For the women in Nepal who feel alone 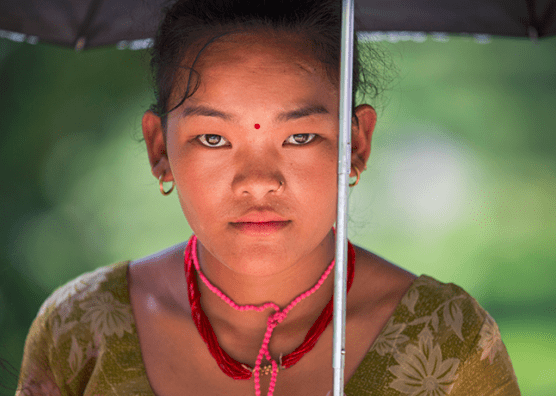 Something invisible is working. 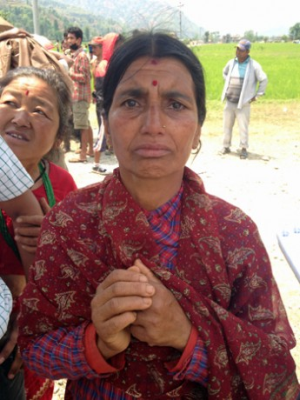 August, 2015—Ambika Pathak is her name. She is 50 years old with dark eyes and dark hair parted down the middle and pulled back.

“She’s telling you that she’s helpless,” the translator said.

I didn’t understand the language, but I heard the despair. Samaritan’s Purse was providing Ambika with food, blankets and a kitchen kit that day, but her plea was for so much more than material goods.

I put my hand on her shoulder and told her I was sorry. We locked eyes for a few seconds. She started crying.

Care for the widows

Three months later, I traveled back to the country and went out to another distribution in the same district. This time our teams were supplying temporary shelter materials to hundreds of people who’d lost their homes.

The first person I met was 70-year-old Dil Maya Tamang, hunched over with her walking stick and a towel wrapped around her skirt. She had walked almost three hours down the mountain to get the materials, and villagers were going to help her take them back and build a new shelter.

Sweat rolled down our faces as we spoke under umbrellas.

“I was working in the field when the earthquake happened,” she said. “If I had been inside the house, I would definitely be gone.”

After losing her home and belongings, Dil Maya had been living alone under a temporary structure in a nearby field. Her husband died 12 years ago.

“I have to cook food alone,” she said. “I have to stay alone. I have many sufferings in my life.”

I asked what gives her hope to keep going every day. Her soft voice replied that she doesn’t have any. “I am just waiting like, ‘When will I die?'”

A few staff gathered around to pray for Dil Maya. I asked what she would want people who may read about her to pray for her.

“If you are really praying for me, then pray that I get relief from all of this burden and sufferings,” she said.

Comfort for the lonely

A few days later, 42-year-old Nirmala Pariyar showed me the various buckets catching rainwater inside her temporary home at an internally-displaced persons camp. We sat down on her wooden bed to talk as a chicken wandered around the other side of the one-room shelter.

“Even if my heart cries, I am happy that I am able to share my problems with you,” she said.

Nirmala’s life was turned upside down in the earthquake. She lost her house and has been living with about 50 other families in the camp on the side of a mountain. Samaritan’s Purse has provided clean water, sanitation, and hygiene support—including building latrines for the camp. Nirmala is thankful for this help and the other things she has received. But she’s sad to be by herself.

The following week, I returned to the camp. I forgot to avoid the taller grass and ended up with what felt like 100 prickles stuck to the bottom of my skirt. Nirmala came over next to me, and we silently picked them out together, one by one.

Light for the lost

The cascading limbs of a large banyan tree hang by the entrance of another camp right off of a busy road in Nuwakot district. These families are living in limbo: They can’t rebuild in their village because landslides have made it too dangerous, but there is nowhere else to go.

Groups were sitting around in the shade, children were running down the paths in between tents, and young girls were washing clothes in one of the hygiene kit buckets we had provided.

As the daily rainfall began, Goma Kumari Pudasainli invited me to come and listen to her story. Goma, her mother, a neighbor, the translator and I sat in her tent as water drops hit the plastic and horns blared from the road.

“I want to tell you my story because my husband is missing right now,” she began. She said he has been gone for 13 years, and no one knows if he is dead or alive. “It’s difficult to spend life alone.”

Goma has been working tirelessly as a maid to support her three teenage daughters. The headmaster is helping them board near their school because Goma thinks they will be too scared to stay in the tent.

When she began describing them, her face lit up.

“They all want to serve people and help with their needs,” she said. “One day they want to open their own organization and serve the people.”

She said she’s proud of her girls; they keep her going. “I have wished for the children daily. For tomorrow, I wish I could live for them, do work for them, earn money for them.”

Sowing seeds for a future and a hope

My last day in Nepal I met a local pastor, full of joy and passion, who said that the earthquake has created more opportunities to reach people. He believes one of the most effective ways for Christians to demonstrate the Gospel in his country is by going out and meeting physical needs for those who are suffering.

“We are trying to influence, to impact people by expressing our righteousness—that Christ lives in us and comes out of our lives through our actions by helping,” he said. “They see it. That will influence their lives. I believe it.”

He also spoke about the challenges of doing work under religious restrictions and how he has been imprisoned for his faith multiple times.

“I know you cannot preach openly, but you can do more than that—be with people, stand with people, help those in need,” he said.

This was all I had to offer the women I met. So often it doesn’t feel like enough. But  the pastor  reminded me that God is there too. He is with the people trekking through mountainous terrain to get shelter for their families and in the midst of dirty, wet displaced persons camps. Isn’t there more going on than what meets the eye?

The pastor gave me hope that there is.

“Something invisible is working there in the lives of people,” he said. “Seeds are being sown in the hearts of people for eternity, and in the fullness of time it will come out.”

All I have to offer now is this one small part of their stories. For the women in Nepal who feel alone: We’re with you. We see you. Something invisible is working.