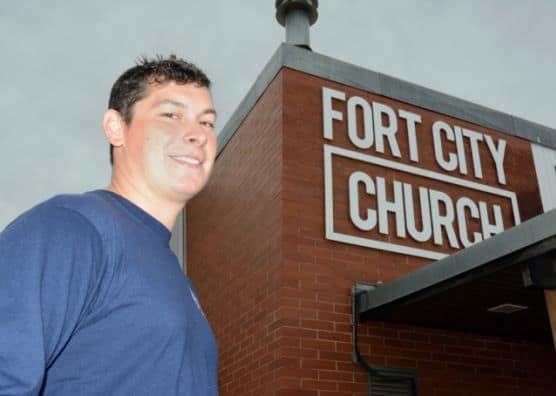 Everyone in the Fort McMurray region has a story about how they escaped the catastrophic wildfire that ravaged entire neighborhoods in the northern Alberta city.

Lucas Welsh’s is special. Not only is he a part-time pastor at Fort City Church, he’s also a full-time firefighter who spent eight days fighting the deadly blaze.

Initially assigned to the city’s Beacon Hill community, Lucas and other firefighters were soon told to abandon the area because the intense flames could not be stopped.

Taking up a spot in the Wood Buffalo neighborhood, Lucas fought to keep the fire from spreading to communities such as Dickensfield. That’s where his family lived before being evacuated.

“There was a point where I spun around and every horizon had black smoke,” he recalled in June. That was after the month-long evacuation order was lifted and most Fort McMurray residents were allowed to return home.

“I never thought I would die, but I did think my life was in danger.”

How bad did it get? “My boot caught fire, then someone grabbed an extinguisher and put it out.”

Lucas’ neighborhood was spared any damage, but more than 2,400 buildings (most of them houses) were burned to their foundations. Street after street in Beacon Hill, Wood Buffalo, Abasand, and Waterways was ravaged, leaving little more than burned out vehicles.

After eight days, it was decided that Fort McMurray was safe enough for some firefighters to leave. Lucas was among them, eventually ending up in Edmonton with his wife, Camille, and two young sons.

When he returned, Lucas experienced a week of what he called “overwhelming uncertainly and helplessness.

“Normally, when you save five houses, you think you’ve done a good job,” he explained. “But in this case, by the time we saved five, there were 15 more burning down the street.”

The solution to gloom experienced by many firefighters, he decided, was to organize a worship service at Fort City Church for his colleagues.

Fort City is where Samaritan’s Purse had its Disaster Relief Unit set up for volunteers who were helping Fort McMurray residents.

In addition, the Billy Graham Evangelistic Association’s Mobile Ministry Center  was at the church. It’s the home base for teams of crisis-trained Rapid Response Team chaplains, who spent a week at a time in the city, ministering to residents and volunteers.

Lucas wasn’t able to attend the service (he was back on the job), but “it was good for the guys who went.”

In the aftermath, as he spoke to reporters (including CBC, which produced a video and article on its website), Lucas found himself with spiritual questions.

“I examined my faith and wondered if this wildfire is something I can resolve and get past.”

What he didn’t want to do was paper over everything with easy, well-rehearsed answers.

“Through all of this, I’m thinking there are so many people with questions and I’m afraid Christians would tell them clichÃ© answers. I wanted non-Christians to feel okay about asking why God would allow this.”

Answers and provision from God

In fact, Lucas himself went straight to that question.

“I had to answer that, and the answer was: not everything that happens is for a reason. But our response [as Christians by helping in Fort McMurray]? There’s purpose in that. And I’m very comfortable sharing that with the guys I work with.”

Lucas and his church are honored to host Samaritan’s Purse and the Billy Graham Evangelistic Association.

“This is the perfect location,” he said. “Even the fact that Samaritan’s Purse and the Billy Graham Rapid Response Team chaplains take care of physical, emotional, and spiritual needs, it’s a perfect combination.”

As he watched Samaritan’s Purse staff and vehicles coming and going, Lucas noted, “I’ve never seen this parking lot so busy. And to have people ready and waiting, with tools in hand, is an amazing and essential service.


On May 3, 2016 Fort McMurray, Alberta was evacuated due to a massive wildfire that engulfed the city and region of 80,000. Over 2,400 buildings were destroyed in the fire. Residents have been returning since the evacuation order was lifted June 1. On July 6, the Alberta government announced the fire was under control. Samaritan’s Purse sent  staff and volunteers to  the area, to meet  the physical needs of residents while sharing the love of Jesus.