"Every shoebox counts" and the numbers are up 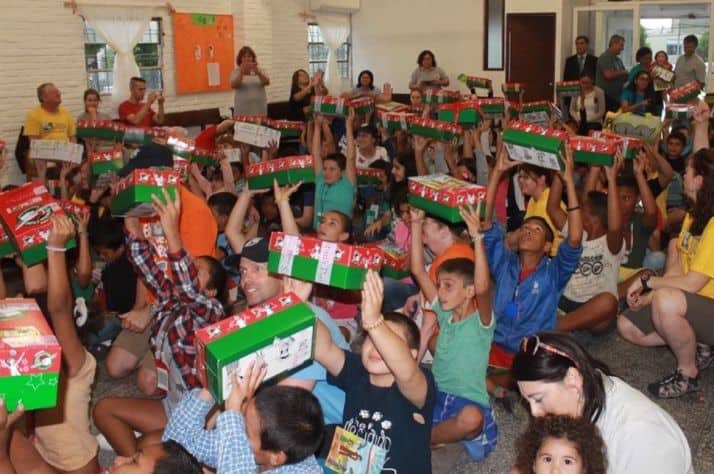 "The more numbers we get, the more families are impacted and the more children can be reached, but every shoebox counts.”

Many of the red and green shoeboxes which were stacked by the hundreds in local businesses and church lobby’s these past 4 weeks, have now been filled with specially chosen items for boys and girls in developing countries around the world and are ready to be sent to the Calgary Processing Centre for Samaritan’s Purse.

Operation Christmas Child asks individuals to fill a shoebox for a boy or girl with items from school supplies to hygiene items to toys, clothes and shoes. And this past Sunday afternoon a local transport company, Straight A Transfer, made stops in Grunthal and Blumenort to pick up those filled shoeboxes.

Brittnay Plett from the Blumenort Community Church has been volunteering with OCC for five years now. Plett says, “I’m the community coordinator so basically, I’m the person that gets all the shoeboxes into the businesses Steinbach and then when they come back, I count them and pack them into large cartons before shipping them out.”

Plett says they changed the way they packed up the cartons this year. In the past they would receive the filled shoeboxes and then host a packing party the Friday night before shipping them out.. “We would pack all the shoe boxes into the cartons and then on Sunday we ship them out. This year, as the shoeboxes came in, we packed them into the cartons. So it was really neat, because when the individuals or the churches and the volunteers brought the filled shoeboxes in, they could see the how they get shipped. Which for us (volunteers) it was really neat for us to see their expressions.” 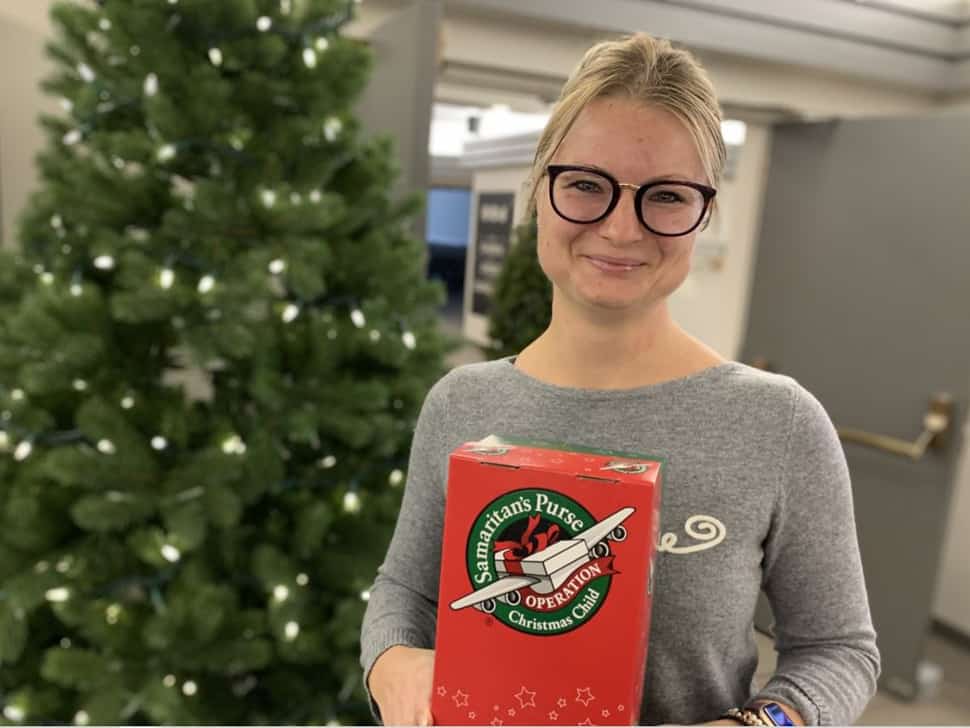 Brittnay Plett OCC Coordinator for the southeast inside the Blumenort Community Church.

Plett says though it’s nice to get a lot of shoeboxes donated, whatever amount they’d receive was still impactful, because “every shoebox counts. It doesn’t matter the number. I mean obviously, the more numbers we get, the more families are impacted and the more children can be reached, but every shoebox counts.”

Plett notes that several local businesses really made an impact this year. “The Great Canadian Dollar Store has locations in Steinbach and in Niverville, they were a big part of the shoebox collection, so that was great. We also had churches from La Broquerie and Steinbach drop-off boxes. Meanwhile, Kleefeld and Grunthal churches combined theirs and brought them here (Blumenort) as well.”

As for the final tally of OCC shoeboxes collected, Plett says, “If my numbers are correct, I have 2388 boxes. Isn’t that wonderful? There are 108 full cartoons and just over 2000, so that’s fantastic. I mean, that’s going to really do a lot of good.”

Plett says though it’s about the same total amount of shoeboxes they’ve collected in past years, their Blumenort Shoebox store put together over 900 box, where as they are normally between 700 and 800.

Meanwhile the OCC shoebox collection coordinator in Grunthal, Frieda Wiebe, tells us where their shoeboxes comes from.

“We collect shoeboxes from residents that live in the Grunthal area, south of Steinbach. We packed them up this morning (Sunday), right after we dedicated them. Then we put them in our truck and came to Blumenort to load up their boxes and together we’ll take them off to Winnipeg and they’ll meet the Winnipeg Samaritan’s Purse trailer, which probably leaves for Calgary on Wednesday or so, once it’s full.”

Wiebe says, the Grunthal area residents put together 2,125 shoeboxes. Which she believes is higher than last year.

When asked why that might be, Wiebe says, “No clue. We had two churches that decided not to take part at all this year, so I really have no clue. It’s just the people of southeast Manitoba, they love to bless others and this is our opportunity to reach to the ends of the earth to share the gospel. That’s what it’s all about.” 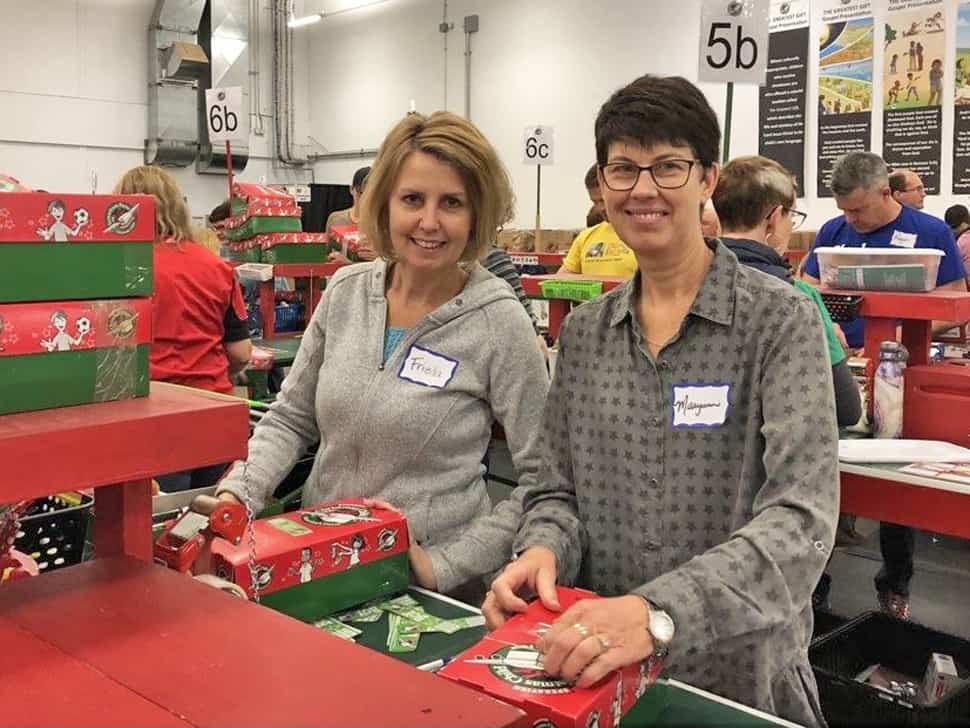 Following the adventure of the Operation Christmas Child Shoebox, Wiebe is flying to the Calgary Processing Centre of Samaritan’s Purse this week. “I’m hopping on a plane on Wednesday with my sister. I’m thrilled. It’s kind of our sisters weekend getaway. We will be processing for two shifts on Thursday, Friday and Saturday. Then we want to be home for Sunday lunch.”

“I was also on a (shoebox) distribution in 2015. We went to Uraguay. It was wonderful. The plan had been to go with my sister, because we’re relatively close. Unfortunately, she was fighting cancer at the time, which thank goodness she is past that, and so now we at least get to do the Calgary trips.” 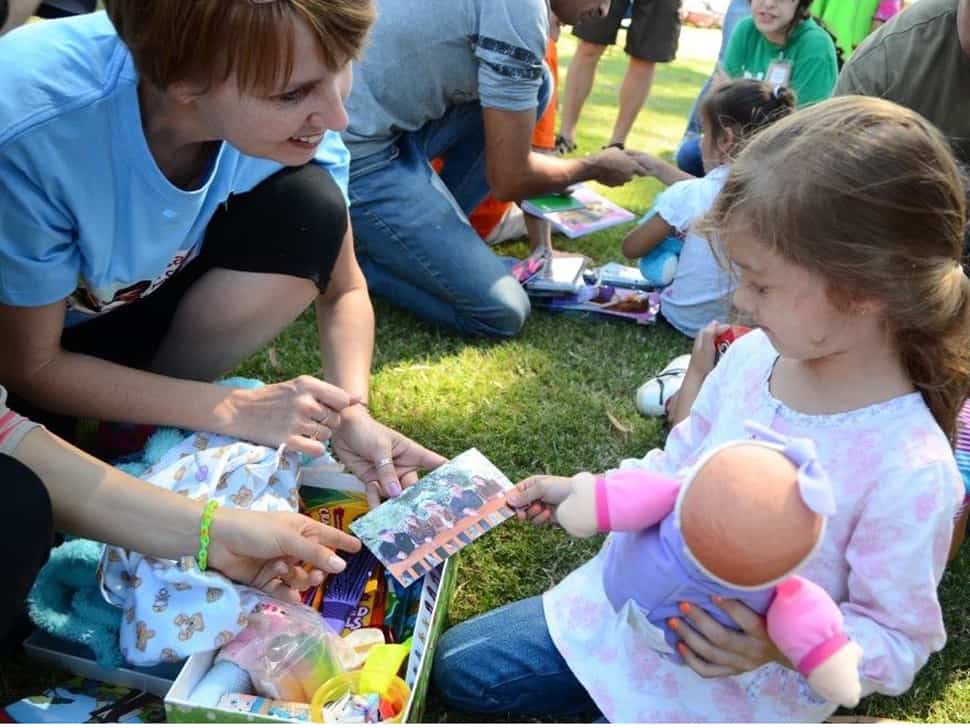 When comes to thanks you’s Brittnay Plett says, “Just thanks to everybody that packed a shoebox. If you’ve contributed to this, I tell you the life that is around you packing a shoebox, and all the lives that are impacted along the way in the life of a shoebox, there are hundreds and thousands of lives that get to see and touch the shoe box and to the family that actually receives the shoe box, it will be such a huge blessing. It’s just so amazing and the power of God that is in a shoe box it’s just really amazing and it just brings people together in community.”

You can still put together an Operation Christmas Child Shoebox. Go to the Samaritan’s Purse website.