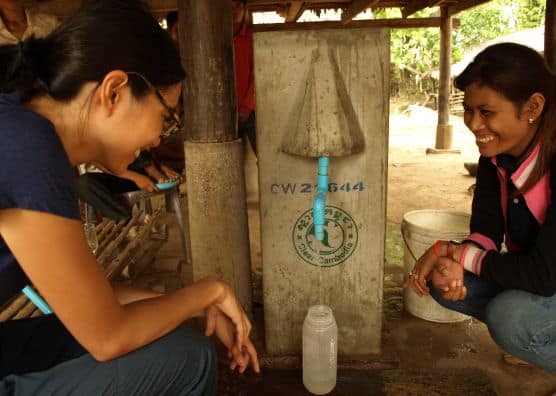 A recent seven-month internship in Cambodia served as an “eye-opening” experience for Etobicoke’s Anh Nguyen.

Nguyen, 28, was one of six Canadian interns who travelled to the southeast Asian country last June to work on water projects with Samaritan’s Purse Canada-a nondenominational evangelical Christian organization that has been “providing spiritual and physical aid to hurting people around the world” since 1970.

“I learned a lot about myself, as well as what this project means to people. You don’t understand really what clean water means until you don’t have access to it anymore,” Nguyen said of the experience last week upon her return. “I learned to appreciate just how much we have here in Canada. You go there and you see how much something simple like a water filter can change people’s lives-it helps whole families.”

Over the last 15 years, Samaritan’s Purse Canada has partnered with the Canadian International Development Agency (CIDA) to send more than 120 young Canadian post-secondary graduates like Nguyen to serve as interns in 20-some developing countries around the world. The internship program sees its young interns working in some of the world’s neediest communities-including recent water projects in Cambodia, Indonesia, Kenya, Nicaragua, and Uganda-where they work alongside local partners, focusing on relationship-building and community participation.

Using Canadian-designed BioSand Water Filters, Samaritan’s Purse has provided clean water for more than 190,000 families with their ongoing water projects over the years. The BioSand household filters are long-lasting and remove up to 99 per cent of all contaminants-turning previously undrinkable water from nearby ponds, rivers, and ditches into clear, drinkable water.

Based out of Phnom Penh, Nguyen and her fellow interns spent their weekdays from June until late January traveling into the rural provincial villages of Cambodia, shadowing the local Samaritan’s Purse staff as they went about installing the water filters in village homes-and drinking the filtered water themselves.

“Even myself, when we lived in the provinces through the week, that’s what we used to drink clean water. I always trusted that it was clean and I never got sick,” Nguyen said, noting that most of the villages and rice farms they visited sourced their drinking water from nearby ponds and rain water catch basins. “You could just see the difference between the water people were drawing from, to what they were drinking after it was filtered. It was amazing.”

In addition to learning all about how the filters worked, Nguyen said she and the other interns were also tasked with working on a public education campaign to promote hygiene and urge healthy living.

“We also worked on a behaviour change project-how to teach people to not just drink clean water, but to learn how to live healthy,” she said, noting that there was generally no running water and little to no latrines in the rural areas where they worked. “A component of it was developing promotional materials to help health and sanitation staff effectively teach people about proper hand washing, the use of latrines, and the importance of drinking clean, filtered water.”

Now that she’s returned from Cambodia, Vietnam-born Nguyen said she has a whole new appreciation for those who work to improve the lives of others on a full-time basis-and hopes to pursue similar work in the future.

“Working with the local Samaritan’s Purse staff, they’re the ones who impacted me most. They sacrifice time with their families, because they live and work away from home all week long. They go out and they work and they’re super passionate about helping their fellow countrymen and providing clean water for them. I learned so much from them,” she said.

“It definitely sparked something inside me in terms of wanting to do international work. I would definitely go back, because it was such a great, eye-opening experience.”