The 36-bed unit will treat earthquake injuries and provide other support to a region overwhelmed by medical and other needs.

On Saturday, Aug. 21, Samaritan’s Purse opened an Emergency Field Hospital in Les Cayes, Haiti. The 36-bed unit is helping fill the gap in the local healthcare system after a 7.2 magnitude earthquake rocked the country Aug. 14. The Samaritan’s Purse field hospital is complete with an operating theatre, pharmacy, laboratory, and three patient wards.

Les Cayes typically has 10 operating rooms, but that number was reduced to just three after the earthquake hit. Now, the southern region of Haiti is experiencing an increase in need—from broken bones, crush injuries, and other earthquake-related wounds—and a decrease in services.

Shortly after opening, our hospital began receiving a steady stream of patients—the injured limping in on crutches, babies carried in with deep wounds—with many injuries already showing signs of infection. 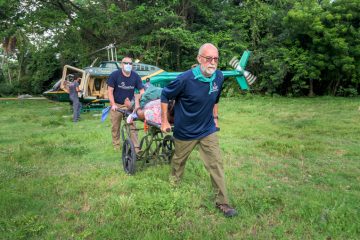 A patient is being transported to our hospital from a helicopter airlift.

The Samaritan’s Purse medical team launched into action, ready to use their skillset and training not just to provide physical relief, but to also to remind patients that God loves them and that there’s still hope. Canadian DART (Disaster Assistance Response Team) members, also deployed to provide basic medical care and health assessments.

In the first 72 hours of operation, more than 200 patients received care, and nine surgeries were completed.

“If we can come here in this critical time and help provide care that will spur healing, that will mean a lot for them and their physical health,” said Melanie Wubs, medical director of the Emergency Field Hospital in Haiti. “But if we can also take time to listen, to pray, and to share with them the hope of Jesus, that will be everlasting.”

In a special ceremony on Monday, Aug. 23, our hospital staff gathered with local leaders to celebrate the beginning of the Samaritan’s Purse medical response and to seek God’s guidance for the days ahead. A number of groups, including the Pan American Health Organization and Haiti’s Ministry of Health, have played a significant role in assisting our response. 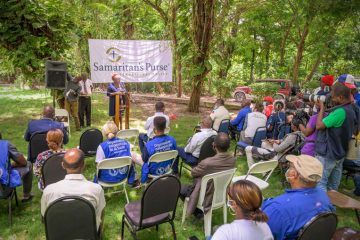 “It’s a big support for us. We need more hospitals,” Rameau said. “We are grateful for Samaritan’s Purse because we have so many people here in need of assistance.”

Helping the Broken and Grieving

One of the first patients who came to the Emergency Field Hospital was Adonnia, an 11-month-old boy. His mother, Rosenine, shared his harrowing story of survival as she thanked God for his life.

Rosenine was in Les Cayes when the earthquake struck and was roughly an hour’s drive from the rural town of Maniche where her two children were at home with their uncle. Then, the ground violently shook. It was like nothing she had ever experienced.

Immediately, Rosenine was afraid, because she knew their home was not structurally sound. After a long taxi ride up a rutted-out gravel road, she came home to find her neighbors and husband crying and screaming outside her home. It had been reduced to a pile of rubble, and it seemed impossible that anyone would survive its collapse. 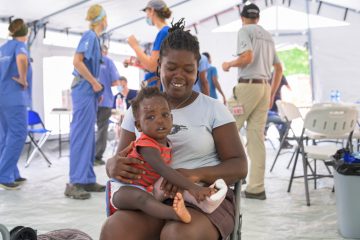 Rosaline is grateful to God for protecting her son Adonnia and for providing care through Samaritan’s Purse.

As they dug through the rubble, they found that her 2-year-old daughter and their uncle were tragically killed. Miraculously, Adonnia survived. He was found underneath the body of his uncle, who had shielded Adonnia from the impact and saved his life. Now, Rosenine is simultaneously celebrating Adonnia’s survival and grieving her daughter’s death.

Adonnia had deep wounds on his face, and his left leg was still swollen one week later. The normally active little boy was crying all the time and refusing to walk. Rosenine heard from a friend that Samaritan’s Purse might be able to help, so she brought her son to the field hospital. There, Dr. Larry Harmon confirmed that Adonnia’s tibia was broken and that the cuts on his face were becoming infected. The doctors and nurses cleaned his wounds and splinted his leg.

As they prepared to discharge Adonnia, Rosenine said, “I told [the medical team] a thousand thank you’s because I couldn’t do it on my own. I’m happy that you are here.”

Samaritan’s Purse is also working in Maniche, the town that Rosenine and her family call home. Its close proximity to the epicenter left it almost completely leveled—90 percent of homes in the area are uninhabitable. Families just like Rosenine’s are sleeping outside with little to no shelter and limited access to water. 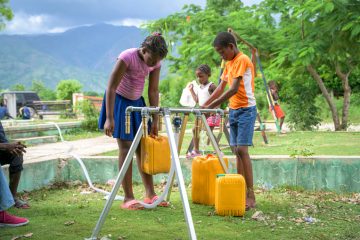 In addition to medical care, we are also providing clean water sources–free of cholera–to communities.

To meet this need, Samaritan’s Purse deployed a water system, capable of purifying enough clean water to provide for 10,000 people each day. Developed by Samaritan’s Purse, the filtration unit is specially designed to fit on one pallet within the DC-8 cargo plane. Its compact size and versatility make it a premiere system for international relief as it can purify both fresh water and salt water.

As clean drinking water flowed from the tap stand, the mayor of Maniche, Jean Bernard, said, “No one could find water to drink. I thank you guys because what you did today is a big thing for the community. Now we have water to drink.”

Samaritan’s Purse is also distributing emergency shelter material and solar lights in hard-hit areas. Tens of thousands of people were impacted by the earthquake. Even if their home is still standing, they are terrified to be inside the structure as aftershocks continue to shake the region. The emergency needs are overwhelming, but Samaritan’s Purse is committed to helping bring physical relief while sharing God’s love.

Please pray for Haiti as we share the hope of the Gospel of Jesus Christ in the aftermath of the earthquake. 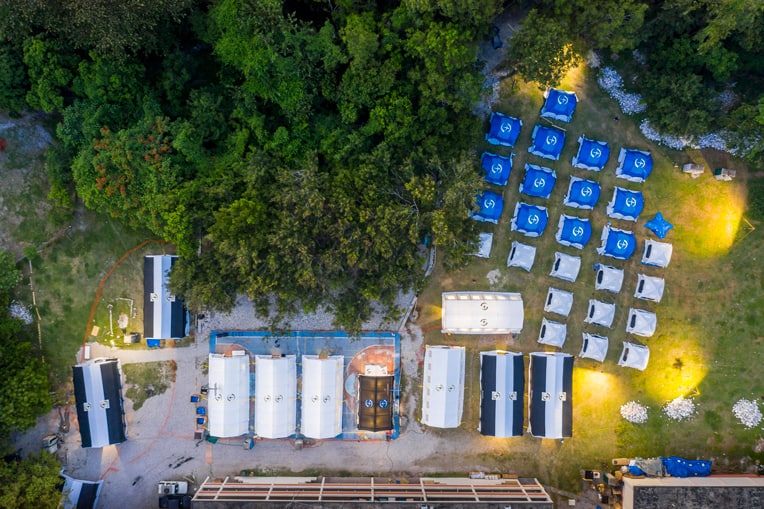 The Emergency Field Hospital at close of day.