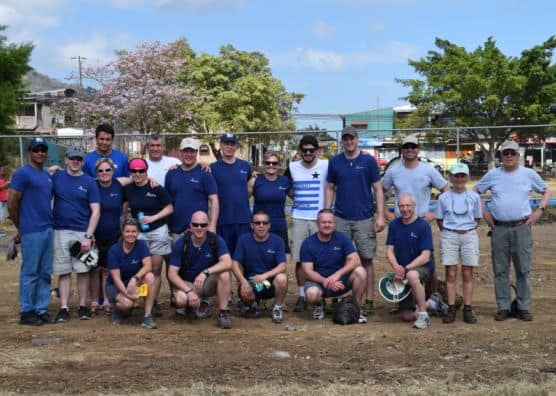 In the days leading up to his Costa Rica trip with Samaritan’s Purse, city police Const. Brayden Lawrence packed a shoebox full of Disney items with the help of his five-year-old daughter.

The box was for a girl the same age living in Costa Rica. The moment Lawrence sat down with the Costa Rican child and handed her the box, there was an instant connection.

Opening the box, the first thing the girl saw was a Mini Mouse stuffed animal. Her eyes lit up with excitement. Then she found a gold coin with the Edmonton Police Service crest that nearly brought her to tears.

“She was so excited when she picked it out…it’s something I’ll never forget,” said Lawrence. “A lot of the kids have never had a gift or anything like that in their lives. They were very touched, they were so thankful and just so excited to be getting some of the little things we would think are fairly minor.”

The three Edmonton officers were joined by retired Edmonton police Sgt. Merle Doherty, and seven officers from Calgary. They also distributed shoes and wheelchairs, met with local police, and spent four days building a playground in a city just outside of the capital of San Jose.

According to Lawrence, the city the playground was built is known as one of the worst places for crime and drug violence in the country. The community, however, came out in droves to lend a helping hand, including an 82-year-old retired police officer.

“They (the kids) were just over the moon about it,” said Lawrence, adding the previous playground consisted of seven big tires.

“They (community members) were all digging holes and pouring cement and you name it. They wanted it done just as badly as we did.”

This year marked the second time Edmonton police officers have joined Samaritan’s Purse on a trip to help children and families in Costa Rica. The trip, paid by members using their own vacation time, was the first time Lawrence had been to a developing country.

When he first saw the posting about the trip, the 31-year-old realized it outlined what he enjoys most about his job in Canada — working with children. Seeing it as a way to give back to the less fortunate, Lawrence felt it was something he needed to do for himself, and is already hoping to go back next year.

“It was an amazing experience and something I will probably never forget,” he said. “No act of generosity is too small; you never know when you can change somebody else’s life on the other side of the world.”