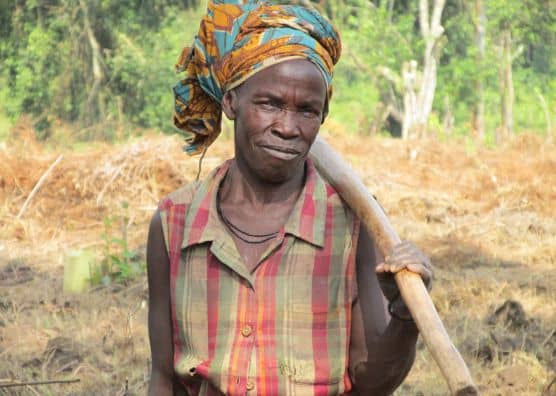 A trip to the Democratic Republic of the Congo gives perspective on the violence that has ravaged the countryâ€”and the people who have suffered as a result. Still, they have hope for their families and their nation.

September, 2014—The late afternoon sun still shone brightly through the tropical trees and on the lush green hills around me as I rode on the back of a motorcycle through the jungles of the Democratic Republic of the Congo (DRC). I was there to visit an emergency response project  Samaritan’s Purse was  implementing. It was my first visit to this spectacular country and the beauty around me seemed to deny the extreme poverty I knew existed—which was the reason I was there.

Along the dirt trail we passed abandoned huts, reminders of the nearby violence and suffering that plagues this region. Although the DRC has been in the middle of internal conflicts for decades, making it one of the poorest countries in the world, the country had recently suffered new rebel activity. These rebel groups loot and steal, their objectives which may have initially motivated them now long-forgotten except for an inherent need to be in control at whatever cost, causing millions in the country to be displaced. To avoid the looting and worse, families have fled, often travelling by foot for days, to safer communities where they must rely on local hospitality to let them live there. Coming with nothing but the clothes on their backs, thousands have found themselves without food, water or shelter.

Hope for an abundant harvest

While shelter can often be made with branches, grass, and mud found in abundance in the hills of eastern DRC, sufficient food to eat is much more difficult to come by. To assist with this lack of food, Samaritan’s Purse has recently begun an agricultural project where families are provided with seeds, tools, training in best growing practices, and access to a plot of land. When harvest comes, families will have enough to feed their families as well as sell a portion of the harvest in the markets to pay for education and other much-needed items.

The fields we visited that day in the jungle were still being cleared of trees and underbrush. The women and men who are being assisted through this project were working hard at getting their plot of land ready for planting. There was still much to be done. I greeted the men and women as they worked, trying to communicate through the language barrier between the Congolese Swahili they spoke and the English I spoke. But somehow over the couple of hours I spent there, we made a connection, sharing a handshake and laughing over photos I would show of them that I had just taken.

However  underneath the laughter and the gratefulness they expressed in the help being provided, it was easy to sense their struggles, anger and disappointment at not being able to provide for their families. As the fertile soil was beginning to show though, I saw that they also had hope. Hope of the upcoming harvest. Hope for enough food to eat. Hope that they will once again be providing for their families. Hope for peace in their country.

As I left the fields I could only hope and pray that this project will also show these men and women the hope they can have in Jesus and His love, and that they will know and experience the peace that He alone can bring to their families, their communities, and their country.