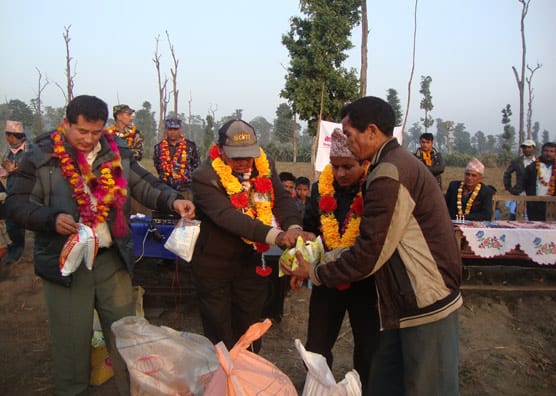 Samaritan's Purse is providing emergency food and a longer-term livestock program for starving communities in a remote area of Nepal.

Even in prosperous Canada, drought can be a devastating event. But for the Chepang tribe in Nepal, it is a matter of life and death.

There has been no rain for two years in the remote region the Chepang people call home. The area’s parched soil fails to yield crops, and poor irrigation does little to ease the crisis. Poverty and starvation are running rampant.

Bidwan* and his wife have lived in this area of Nepal for twelve years. The drought has dried up the nearby river, and with it, the couple’s crops, livelihood, and hope of survival. They have been forced to raise their five young children on less than one meal a day.

That’s why Samaritan’s Purse is working with a Christian partner in Nepal to provide emergency food to the Chepang tribe. Through the prayers and financial support of Canadian donors, over 700 impoverished and starving people now have food supplies that include rice, lentils, oil and salt. Nepalese families that once scrounged in the jungle for roots and fruit to survive are being sustained.

Today, Bidwan and his family are thankful for the help. “We realized there are people who take care of others,” they said.

And there are countless others who-because of this feeding program-are learning that God sees their difficulties and has compassion on them.

One of them is Shanta*. He and his wife have seven children and an elderly mother to care for. Since the drought wiped out their crops, they have waited in vain for government aid. But today, because of the food supplies that Samaritan’s Purse has provided, they find hope in God instead.

“We thank God for His generosity and faithfulness to the poor people living here,” Shanta said with tears in his eyes.

But emergency food is only a temporary solution to the crisis.

We are also implementing a livestock program for the Chepang people. Along with the gift of two goats and a goat shed, dozens of Chepang families will receive training on how to care for and breed their livestock.

Even more importantly, they will be trained on how to make a living through the production and sale of dairy products. Though raising crops is the traditional source of income in this region, the livestock program will provide an alternative and more sustainable livelihood.

This work is made possible by donors like you. But there is more to be done. As the drought continues, our prayer is that we may give the Chepang tribe the means to provide for their families. One of our greatest desires is that we might bless, in Jesus’ Name, the countless people who are suffering from natural disasters, war, disease, and famine around the world.