Samaritan’s Purse is responding through local partners to what news agencies are describing as â€œthe worst flooding on record in the Balkans.â€

May, 2014—”I could not believe that the water could possibly rise as high as it did,” said Jankovic Nicola. On May 15, he and his family had no choice but to evacuate their property in Serbia due to encroaching flood waters. “I would look down the hill and see the river rising, and say [to myself]: ‘Poor people who live down there.'” Little did Jankovic know that soon one of the two houses on his own property would be filled with filthy water three meters deep.

“I managed to send my wife and three children off to relatives in Austria yesterday,” he told the members of our Samaritan’s Purse Disaster Assistance Response Team (DART), who are on the ground in Belgrade, Serbia.

“If I had a message for the people of good heart around the world I would say, ‘Let’s all come to our senses and be one,'” said Jankovic. “We need your help.” 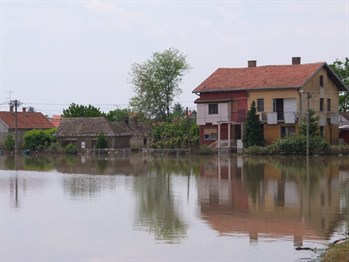 Tens of thousands of people in Serbia and Bosnia have fled their homes as the Balkan region suffers from its worst flooding in 120 years. Three months’ worth of rainfall in mere days led not only to catastrophic flooding but also devastating landslides. Roads, homes, farmlands, and whole villages have been destroyed. At least 49 people have died, but more casualties are expected.

Our DART reports that about 40 crisis centers—student dorms, hotels, hostels, sports and leisure centers, stadiums, and more—are sheltering displaced people around Belgrade and district. Most of the displaced are from the devastated town of Obrenovac (read more about Obrenovac here). Thousands more are staying with friends, relatives, and well-wishers in the region.

Samaritan’s Purse is working alongside key Serbian church leaders and Christian organizations. Teams are being mobilized to ensure food, water, non-food items (particularly sanitary items), and other essential goods are reaching those in need.

“I am quite encouraged by the local response in Belgrade,” said Alan Cutting, team leader for the DART. “However, the first flush of enthusiasm, the good will, is fading. It might not continue. What happens when the big international NGOs leave? Then we come in and strengthen the church. I love it when Samaritan’s Purse can fill the gaps and meet the needs.”

Read more about how Samaritan’s Purse is responding to the flooding in the Balkans.