Distributing aid in Haiti is a dangerous proposition 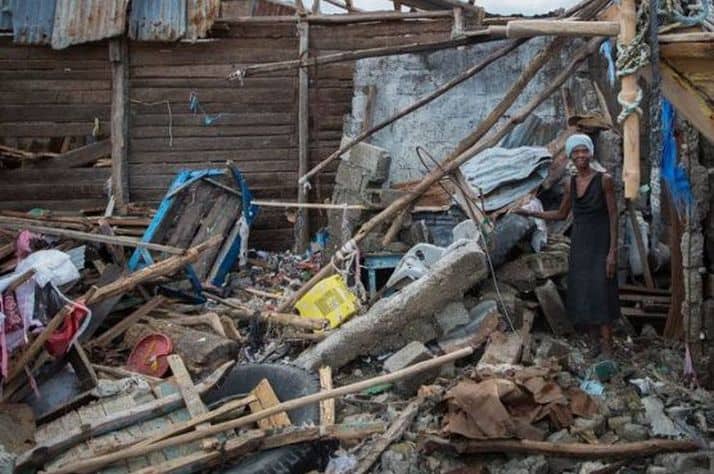 Religion reporting doesn't usually put a journalist in harm's way. But that wasn't the case when an RNS photojournalist accompanied a relief convoy distributing aid in Haiti to victims of Hurricane Matthew.

JEREMIE, Haiti (RNS) I shut my eyes as he swung the large rock at the car window. An instant before, something about his eyes had seemed off. They were glazed over. Maybe he was drunk, or thirsty, or just furious.

Regardless, the rock slammed against my window, just a foot or so away from my head. The window held. All the while he yelled, “Get out of the car!”  Well, I don’t speak French or Haitian Creole, but I’m pretty confident that’s what he was yelling.

Mark Langham, seated in front of me, stepped out of the Land Cruiser to meet the increasingly angry group. Langham, a member of the Samaritan’s Purse Disaster Assistance Response Team (DART), had worked for years in Haiti prior to this trip. His current disaster relief mission came about after Hurricane Matthew’s destruction landed near Jeremie in western Haiti.

“Once the blood leaves their lips, you’re in trouble,” Langham told me later.  “People regress to animal instincts at that point, so you have to intervene before that happens.” Langham has plenty of street smarts after years of disaster relief work around the globe with the evangelical Christian aid organization.

Religion reporting doesn’t usually put a journalist in harm’s way. We spend much of our time in church pews and at interfaith singalongs. But a few days earlier, Religion News Service had been offered a chance to go with Samaritan’s Purse relief workers as they distributed aid in Haiti to victims of Hurricane Matthew.

As a photojournalist, I would have the chance to spend 48 hours visually documenting a high-risk relief effort after the storm left 546 people dead and 175,500 displaced, according to the United Nations and the Haitian government. It is an effort carried out by people motivated by faith.

“There’s almost no other missionary work that allows you to serve the Lord and be near a plane,” said flight engineer Doug Nielson, referring to the refurbished 47-year-old Samaritan’s Purse DC-8 as we left Piedmont Triad International Airport in Greensboro, N.C. The DC-8 made eight flights to Haiti after Hurricane Matthew, bringing a total of 220 tons of humanitarian aid to the country. Samaritan’s Purse also set up two cholera treatment centers, complete with medical equipment and staff.

After landing at Toussaint Louverture International Airport, we made our way to Calvary Chapel complex in Port-au-Prince to stay for the night. People were just finishing up work in the sanctuary. Twenty-four-year-old Decayette Evens, a congregant at Calvary Chapel for the past six years, said the hundreds of trash bags lying around the sanctuary contained clothes, hygiene products, food and seeds. Evens said many rural Haitians rely heavily on gardens, so seeds are very important for reliable food in coming months.

We flew west to Jeremie the following day. We spent the afternoon around Jeremie and several surrounding communities. Gomier, a small coastal town to the east of Jeremie, was one of the first locations to receive aid from Samaritan’s Purse. Gomier Mayor Charles Francois Fils said the town had primarily lost houses and infrastructure, which was evident by simply glancing around the area. Salem Church, the central structure in the town, was reduced to rubble. In all directions trees were snapped in half and almost all houses had at least lost roofs, if not much more.

The mayor said that most people in Gomier rely on fishing and tend personal gardens for much of their food and income. They normally sell what they can along the road and in Jeremie. However, Hurricane Matthew destroyed both gardens and boats, leaving many people desperate for food.

The city of Jeremie seemed to be doing better by comparison. There appeared to be more formal work, with street vendors and shops being open. But that was just how it appeared to me, a passer-by. “It’s unrecognizable,” said Dr. Bette Gebrian, a Jeremie resident of almost 30 years.

Gebrian, a former employee of the Haitian Health Foundation and current faculty member in the Department of Community Medicine at the University of Connecticut, said religious groups, whether they be Catholic, Protestant or Vodou communities, provide the most reliable social structures and are the best bet for long-term development.

“Relief is nice. It’s a gesture of caring,” said Gebrian. “But it’s the work with the long-termers, the people who make that leap from relief to development, who will really make the essential difference in the survival of people here.”

Samaritan’s Purse is one of many organizations and governments offering assistance since Hurricane Matthew, the strongest hurricane to hit Haiti in 52 years according to the United Nations. In Jeremie, Samaritan’s Purse alone has distributed more than 4,000 tarps, blankets and hygiene kits for roughly 2,300 families, and water filters to nearly 2,000 families. In addition to relief supplies, Samaritan’s Purse has helped distribute food to 5,200 people.

Michel Frantzy, 28, a former secondary science teacher who lost his home near Jeremie, illustrates the kind of help Gebrian says is needed. He, his wife and their two children, a 3-year-old and a 10-month-old, are staying with friends for now. Frantzy said that his current employer can’t pay him fully at the moment but that he feels lucky to be working as a cook at the El Shaddai Ministries International complex near the Jeremie airport.

It was on my last morning in Haiti that the looting happened. Our convoy went out with a U.N. escort in the direction of Bonbon, a city to the west, where we were scheduled to distribute 850 relief packets.

About a mile out, we came upon a downed palm tree, which turned out to be a roadblock. It seemed small, with about 10 people manning it, and Langham was confident that with the U.N. help we would be able to get through. But more people come out of nowhere and more locals blocked the back of the line of vehicles, our hopeful exit route.

Then the guy came with the large rock. Langham’s window was also struck, but he barely flinched, trying to keep everyone inside and outside the vehicle calm.

He calmly retrieved the key, walked over to the box truck, slowly unlocked it and let people take what they wanted. Buckets fell out as people shoved and tried to get their hands on whatever they could. In the end, local Haitians took about 100 buckets and a number of tarps. The U.N. peacekeepers escorting us are under orders not to use force if they are not attacked, so in a few minutes the relief-delivery operation was over, having failed to deliver the supplies as planned. We had barely gone a mile from the airport.

Who were the looters? About 50 people who live in an area that was largely devastated by Hurricane Matthew. They were apparently angry that this particular aid convoy was destined for a town 30 minutes to the west.

“They need these items, too,” Langham said later, adding that it was pointless to have a situation where Samaritan’s Purse employees or local Haitians were injured. He planned to meet with local leaders to devise new distribution plans around such roadblocks.

But while the looters may have had use for the tarps, the buckets had holes in the bottom so they could be used with water filtration kits because the destined town had no clean water. They were probably useless for the people who took them.

(Kit Doyle is a photojournalist and photo editor at RNS)