Hilario Morales’ large stature is dwarfed only by the size of the giant heart nestled in his chest. Within it, he seems to store enough love for all of the children in Mexico.

Hilario is a pastor and the founder of Fundación Emmanuel, a home for children-particularly street kids-who have nowhere else to go. His desire is to rescue them through the saving love of Jesus Christ. 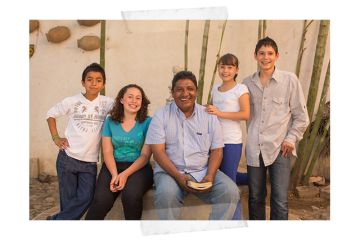 He partners with Samaritan’s Purse to tell children about the Savior. He introduces them to the love of Christ by delivering Operation Christmas Child shoeboxes in the area. At each distribution, church and ministry partners share the Gospel and lives begin to change.

Many of the boys and girls then take the trip of a lifetime by embarking on The Greatest Journey, the discipleship program that invites children who have received shoeboxes into a deeper relationship with Jesus Christ.

The Greatest Journey consists of 12 engaging Bible lessons that local trained teachers use to instruct the next generation of believers on how to become devoted followers of Christ and share their new faith with their friends and family.

“After the distributions there is another step, the beginning of The Greatest Journey,” Hilario said. “Now, they’re not just kids that received a shoebox. They are kids that know Jesus.”

Hilario knows the importance of discipleship. He was a street kid himself, lost and lonely, with a heart filled with fear and hatred. God used a man named Reynaldo-who volunteers with Operation Christmas Child in Mexico-to rescue him from a life of hopelessness by introducing him to the saving power of Jesus Christ and helping him grow in his faith.

Now God is using Hilario as a mentor to disciple young people like Veronica Miranda, who in turn pass on their faith to others.

The bright white building is an oasis on the scrubby desert outskirts of southern Guadalajara. Golden sunlight filters through leafy trees into multiple courtyards, and vibrantly colored paint brightens winding hallways that are decorated with children’s artwork.

This is FundaciÃ³n Emmanuel, where Hilario shelters kids who have been abandoned and given up hope. He gives them a home, provides an education, and shows them the love of Jesus through his tender care and encouragement.

Hilario wanted to give the boys and girls at the foundation and in his community the things he never had as a child-treats, fun outings, and most importantly, a father figure. He would host parties and try to give gifts to every child, but he struggled to raise enough support to provide the presents.

Then, Reynaldo told him about Samaritan’s Purse and Operation Christmas Child. Soon, Hilario began volunteering as a regional coordinator in Jalisco state, handling the distribution of about 30,000 shoebox gifts each year.

Through the shoeboxes, Hilario shares the Gospel of Jesus Christ and the love of God with kids in areas that are fraught with extreme violence, drug use, prostitution, and gang activity. 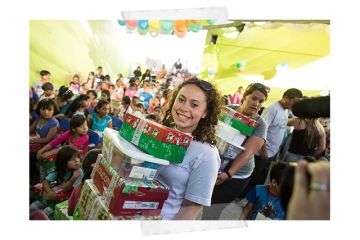 Veronica Miranda is one of the kids whose life has been transformed. When she was eight, her father went to prison for robbing a jewelry store. Her mother moved the family from Texas to Mexico, where their situation quickly deteriorated. Her youngest brother died of a head injury; her uncle was murdered; and her mother and another uncle were also imprisoned.

Veronica and her siblings were placed in the care of a woman who physically abused them. Even from jail, their mother sensed that something was wrong. Through the prison ministry, she met Hilario.

Soon, Veronica and her sister and brother had found a safe new home at FundaciÃ³n Emmanuel.

Hilario encouraged Veronica to pray to God, but when he told her, “God loves you,” she was skeptical. 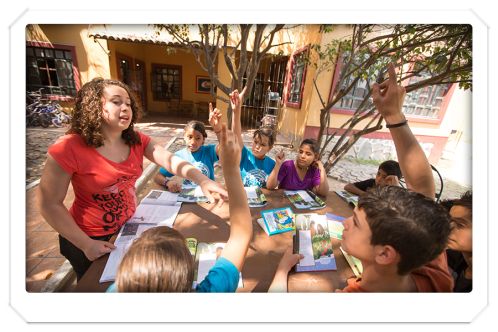 “If God loves me, why did these things happen to me?” she wondered.

As Hilario continued to show her love-love that included a shoebox gift-Veronica’s anger disappeared. She accepted Jesus Christ as her Savior when she was 12. She had a new, soft heart that she asked God to mold, saying she wanted to serve Him.

In the four years since her salvation, she has become a leader at the orphanage, caring for the younger ones as a mother would, helping them with homework and chores.

TAKING A JOURNEY OF FAITH

Operation Christmas Child is just the beginning of good news for many children in Mexico. For the past five years, they have had the opportunity to participate in The Greatest Journey after they receive their shoebox gifts. 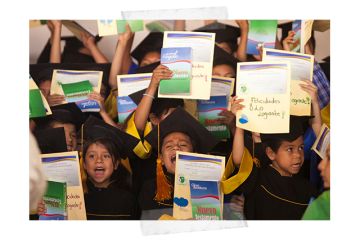 “It is a project that was born, I’m sure, in the heart of God,” said Reynaldo, now the coordinator for The Greatest Journey in Mexico. “[We] hear thousands of testimonies of kids whose lives have been transformed.”

Children are sharing what they learn not only with their peers, but also with adults.

“In many homes, because of the life of a child, the Gospel of our Lord Jesus Christ comes in,” Reynaldo said. “I don’t think I’ve ever seen such a huge army of children all sharing the love of the Lord Jesus.

“I want these kids to learn that there’s Someone that’s going to love them, Someone that’s never going to leave them,” she said. “One day they can teach other kids about God, and make this a generation that will change.”

“In many homes, because of the life of a child, the Gospel of our Lord Jesus Christ comes in,” Reynaldo said. “I don’t think I’ve ever seen such a huge army of children all sharing the love of the Lord Jesus.”

The young teen’s journey has been special for Hilario.

“She has a passion and love to teach,” he said. “We can see how she changed a lot; and now we see that other kids can change through her life.”

About 60 children from FundaciÃ³n Emmanuel and the surrounding community had a lot to celebrate last May after spending 12 weeks taking The Greatest Journey. Each child had received a shoebox gift, and each one completed the lessons and earned a special certificate and their own New Testament. 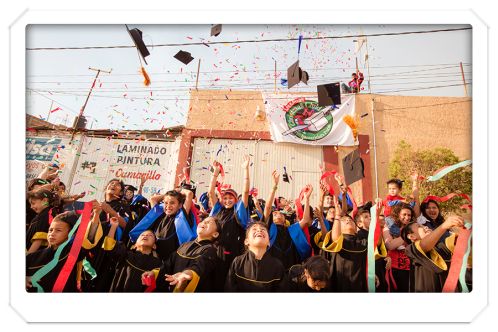 On a brilliant afternoon, colorful confetti filled the air, swirling with the dust that floated in the hot sun. Cheers from 60 children dressed in black graduation gowns followed the confetti into the sky, and 60 smiles spread from ear to ear as they tossed their hats high above their heads.

Veronica beamed as she handed New Testaments to each young graduate. Those children joined more than 1.8 million others in about 90 countries who have completed the discipleship program since 2009.

“When I was in The Greatest Journey, I was so happy because I understood more about God and His love, and I received Him in my heart,” said Veronica’s younger sister, Viridiana.

The discipleship course has also brought Viridiana closer to her sister. They would read and study the lessons together, and Veronica encouraged Viridiana to follow Jesus.

Another of Veronica’s students, 10-year-old Karen Herrera, had never heard about Jesus until the Gospel was presented at a shoebox distribution that she attended at Hilario’s church. After she received her gift, she decided to attend The Greatest Journey classes.

“I feel happy because today we had a graduation and threw our hats in the air,” Karen said after the ceremony. “Most of all, I’m happy because I got a New Testament. When I took the lessons, I invited Jesus into my heart. I learned that He’s my Savior.” 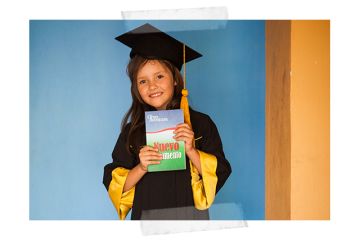 She can’t wait to share her newfound faith in Christ with her cousins and siblings.

Veronica believes the discipleship program will have a lasting effect on upcoming generations.

“I feel really happy because I can see in these kids how God is planting a seed in their hearts,” Veronica said. “Now, I can see them walking in the way of Jesus. It has been a special time.”

Hilario said he will never stop sharing the Good News of Jesus Christ with the children of Mexico through Operation Christmas Child and The Greatest Journey.

“When the people have Jesus Christ in their hearts, they stop living in evil-the robbery, the violence, and the drugs can’t be any more in their hearts because Jesus is using that space,” he said.