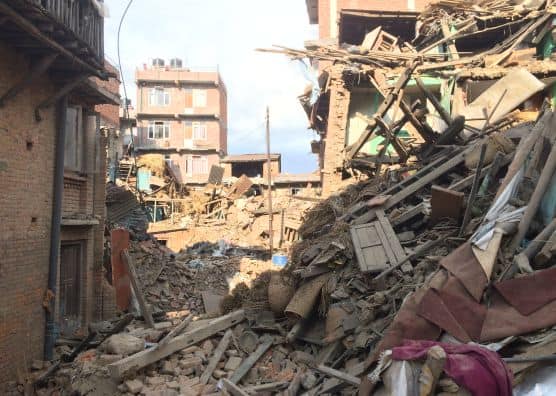 Samaritan's Purse is responding to the disastrous quake.

Samaritan’s Purse disaster response team members are seeing heartbreaking scenes in Nepal in the aftermath of the 7.8 magnitude earthquake that rocked the impoverished Himalayan nation on April 25, 2015.

Our staff is in Nepal to provide emergency shelter, clean water, medical care, and meet other urgent needs for victims of the terrible disaster. As they assess the damage and determine where to work, they are witnessing incredible destruction, death, and tragedy.

As aftershocks continue, people are sleeping outside in tents in the rain and mud because they lost their homes or are petrified to stay inside.

“There are a lot of people sleeping out in the streets,” said Patrick Seger, the team leader for our response. “They are fearful of the buildings and don’t want to sleep inside. They are sleeping in the rain because they don’t have any other shelter.”

Buildings have collapsed, debris clogs the streets, people are still unaccounted for, and the death toll is rising daily. The reality of the severe loss is still being uncovered.


“There’s a lot of hurting people here,” Seger said. “A lot of people lost their homes and lost their incomes. They’re trying to figure out what they’re going to do.”

STORIES FROM THE RUBBLE:  Encountering survivors who lost everything in the Nepal earthquake.

There is not a simple fix for this mass of broken things and broken lives. But our team is here to meet needs for people desperate to survive right now. We are here to look them in the eyes and tell them they’re not alone and healing is possible.

One of our partner churches in Nepal were holding a church service when the earthquake hit. After they felt the quake, they led the people outside and had a one hour worship service after the earthquake, praising God for the safety of their church members. “We are thankful for God that we built a building to withstand a 7.9 earthquake.   We are serving our community. We are opening our doors for the community to come in.”

SHAKEN FOR THE PEOPLE OF NEPAL: A doctor serving with Samaritan’s Purse feels the earthquake while at a retreat near the epicenter.

“We’re doing all we can to help those whose lives have been turned upside down by this terrible disaster,” Samaritan’s Purse President Franklin Graham said. “The people of Nepal urgently need our prayers.” 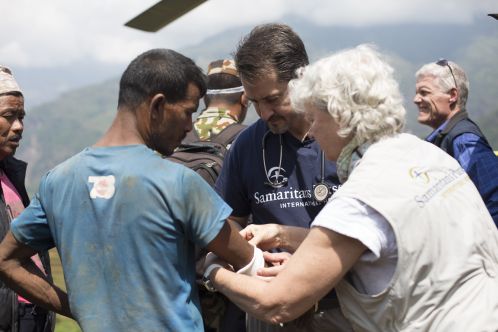 Dr. Lance Plyler, head of the Samaritan’s Purse medical team, treats patients at a mobile clinic in a remote village.

Click here to see a photo gallery of images from Nepal

As our team works with church partners to meet needs, we hear the stories of the survivors. They are people like Nanda Gopal, whose home was destroyed by the quake.

Nanda and his family have been organizing a tent community in their village. The majority of people here work as farmers, craftsmen, and taxi drivers. The earthquake destroyed 75 percent of their homes and killed 20 people.

“Everyone was silent and there were no smiles on their faces for two days,” said Nanda’s son Binay, 23.

He became emotional after talking about the children who lost their lives-specifically a 3-month-old that passed away in the arms of her mother who fell from her house during the earthquake.

“I feel terrible for the people,” he said. “We see the worries in their eyes for their families.”

Our team also met Kumari K.C., who is living in a government building with her mother and two children since the earthquake damaged their home.

When the trembling started, Kumari took off running from her job in a hospital back to the village to find her son and daughter.

On the way, it looked like whole villages were collapsing, and she had little hope that her children would make it.

“I ran to the village with tears in my eyes. I could barely open them because of tears,” she said.

Kumari also worried about her mother, who has breathing problems. The air was so thick with dust and debris. When she arrived home, Kumari found her family was unharmed, although their home was destroyed.

“I have nothing left, but I’m happy that my family is safe,” she said.

Airports are jammed going into Nepal, and access is challenging, but an initial airlift of 60 tons of relief supplies has arrived in Kathmandu. We are sending initial supplies for 15,000 households, and anticipate doing more as the response continues.

The medical team and supplies will support mission hospitals that are Samaritan’s Purse partners.

In the coming days and weeks, Samaritan’s Purse will be reaching thousands of Nepalese who need roofs over their heads, safe water to drink, and treatment for injuries.

This is the work of the body of Christ. Thank you to all who are partnering with us through prayer and support. Please continue to lift up the people of Nepal and trust in the redemptive power of God in the middle of this tragedy.