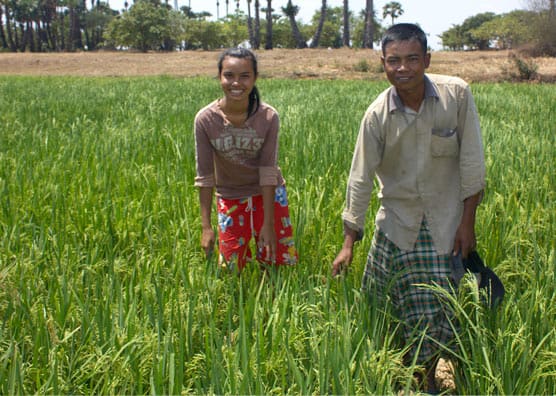 Like many desperately poor farmers in southern Cambodia, Kim Pheap and her husband were once so dependent on their small rice crop that if the annual yields fell below average, they and their four children would be forced to go two or three days without eating.

Samaritan’s Purse suggested  farmers begin by planting a small garden, where Samaritan’s Purse would cover a majority of the start-up costs, and the farmer also contributed. Pheap and her husband-along with several other families in their village-planted a garden and started growing a variety of produce. They also began composting and creating inexpensive, chemical-free fertilizers. Some even purchased livestock.

“All the things Samaritan’s Purse and my church are teaching me-they are helping, and I can help my family with them,” said a smiling Pheap.

By first seeking permission to engage in its work, Samaritan’s Purse has won  support from many community leaders, said community leader Sat Chit. “They started doing exactly what they said they would,” said Chit. “I realized they were sincere. I was glad to work with them. They were offering to help my community.”

The work of Samaritan’s Purse and our partners in Cambodia is done in the Name of Jesus Christ, and this has a profound effect on community members. Chit became a Christian, and so did his wife and children. Chit also became  a church elder. “Because the Christians and the church helped us here, that impressed me,” Chit said. “Their hearts were good and they were faithful.”

“When people see the community development benefits, and when they know the benefits come from a Christian organization, they are willing to hear the Word of God,” a local pastor concluded. “Samaritan’s Purse is showing that Christians are caring people.”