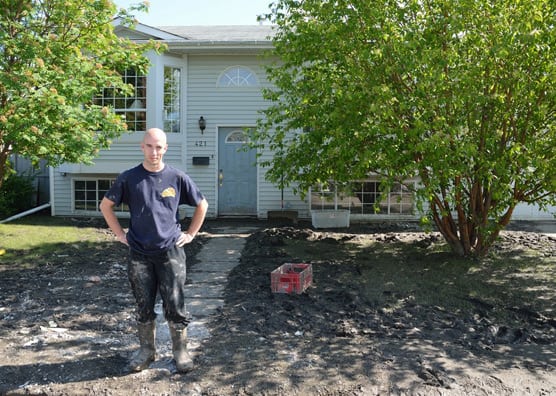 Christians and communities in southern Alberta rose to the call for help and joined the massive relief effort that took shape in Calgary and the surrounding region during the 2013 southern Alberta floods.

By John Clayton, Director of Projects

Though floodwaters devastated homeowners across southern Alberta in late June 2013, just days later a more encouraging scene was unfolding. About 150 pastors and church leaders gathered in Calgary, Okotoks, and Black Diamond to learn how to best respond to the critical call for help. And they were  already mobilizing congregations to join the massive relief effort that was  taking shape.

While our team was in Black Diamond to host a training session about disaster response, we witnessed the widespread flood damage firsthand. It was unbelievable. I felt like I had stepped onto a Hollywood set. Excavators, garbage trucks, industrial vacuum trucks, and scores of electrical generators were hard at work.

One pastor that I met showed me his home, which was much like my own less than a week ago. It sustained severe water damage, and already the majority of materials that were destroyed had  been torn out. The basement sustained most of the damage, and his two daughters-so similar to my own daughters in age-had  to wait weeks before they could  move back in to their bedroom.

Yet even in the midst of the devastation, I was encouraged.

A large-scale community response was already underway, and it was beautiful to see everyone clean up together. And, praise God, the Church was there too, up to Her knees in the muck and responding like a Good Samaritan to the immense need.

Disasters often strike across the globe, but not necessarily as often in our  own backyards-or our  neighbors’, or co-workers’, or family members’, or friends’. Your volunteer hours, financial support, and prayers are like a miracle to devastated homeowners-and we’re calling Good Samaritans like you to join us as we respond to disasters across Canada and around the world.