Caring for just one 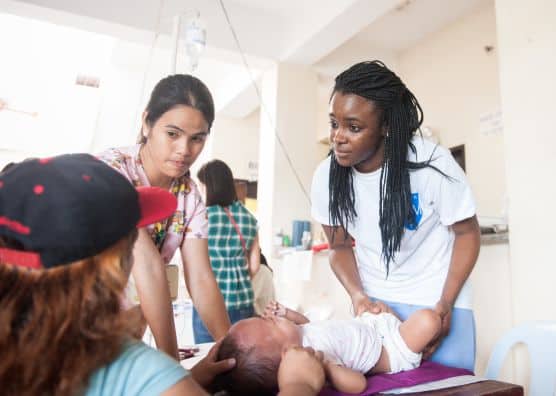 After Typhoon Haiyan destroyed much of the Philippines, Dr. Linda Mobula responded by serving for two months on the Samaritan’s Purse medical team. She describes how she learned that helping one person can be just as important as helping multitudes.

April, 2014—With tears in my eyes, I listened as my patient described the insomnia she had been experiencing since Typhoon Haiyan.

“I stay up all night,” she said. “I keep on thinking about what happened the day the typhoon hit. I was positive I was going to die. I remember seeing the water rush into my house. I still have heart palpitations when I think about it.”

I could have simply written a prescription for a medication that would help with her anxiety as well as insomnia. But in addition to providing medical care, there was so much more I could give. I felt a distinct nudge from the Holy Spirit to offer her more than just a prescription. I asked if it was okay to read Psalm 91 with her. She nodded.

I grabbed my Bible and started reading out loud.

“He who dwells in the secret place of the Most High shall abide under the shadow of the Almighty… You shall not be afraid of the terror by night, nor of the arrow that flies by day, nor of the pestilence that walks in darkness, nor of the destruction that lays waste at noonday…”

As I continued to read the entire Psalm, she began to sob. I asked if I could pray with her. She nodded and grabbed my hand.

I thanked God that He spared her life and thanked Him for the plan He had for her life.

“God spared your life for a reason,” I said. “He has a plan for you.” She continued to grip my hands and cry while I continued to silently pray for her. “Thank you for coming,” she said.

Those four simple words moved me.

My public health background taught me about the importance of designing interventions to reach masses. Saving Lives, Millions at a Time was the motto I often heard. But on that particular day, reaching one single person was enough for me.

God cared enough for her that He wanted me to use His Word to bring hope and comfort to His precious daughter. It was that simple. Just like the lost coin, He cared about the “one.” He taught me to do the same.