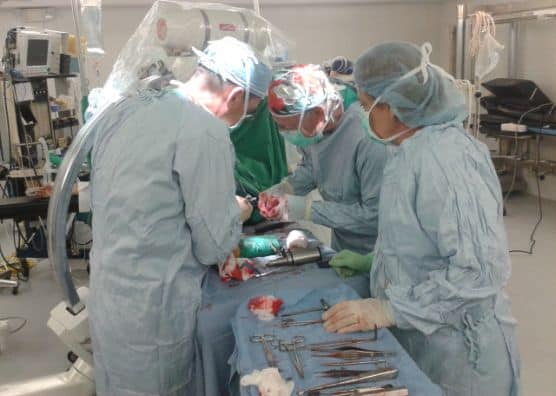 Dr. John Potts works with Samaritan’s Purse at a clinic in quake-stricken Portoviejo.

April, 2016—We set off to Portoviejo, stopping for lunch at about 12:30 p.m. in a little town to have a good meal of rice and chicken. We were thinking we might not get to eat again for a while—it turned out we were right.

At about 2 p.m. we arrived at Fondacion La Vida, a hospital that is run by Paul and Flor Fellows. It provides orthopedic surgery for children. It has two lovely operating rooms ready for major orthopedic surgery, and a total of eight (yes, only eight) beds.

Paul is an orthopedic surgeon and Flor is his scrub nurse. They do everything else too—the hospital’s administration, fundraising, everything. When we arrived, they had just returned from visiting the other hospitals in Portoviejo and had collected four patients who needed surgery.

Fondacion La Vida is slowly becoming inundated with volunteers. Two anaesthetists and an orthopedic surgeon had arrived from Guayaquil,  which got two operating rooms going for the four patients. 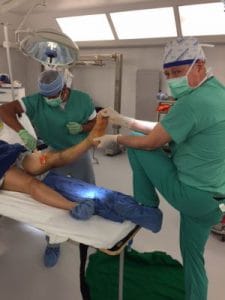 Samaritan’s Purse is sending medical staff, including 2 Canadians, to help care for those affected by the earthquake in Ecuador.

There is also a team of Ecuadorians who are in various stages of medical training in Mexico. A team of 17, I think!

I spent the afternoon and evening in the operating room helping with the cases—all of which went very nicely. These are very capable people at work.

We finished after 9 p.m. and were happy that we had eaten well back at noon!

As for sleeping arrangements, some set up tents outside but we slept on couches in one of the waiting rooms in the Out Patient Department. Our team leader slept in X-ray.

This morning, we met together as a team. Samaritan’s Purse’s DC-8 cargo plane had landed in Guayaquil with a crew of medical people and  a field hospital. The Ministry of Health has asked us to set up the field hospital in Chone, a bigger town farther inland, which sustained  more damage. Nearly everyone is loading into a van and heading to Chone to get ready.

But for now, this is the most helpful place to put my skills to work.

My guess is that within a few days there will be enough staff and equipment here in Portoviejo that I can head up to Chone as well. Both anaesthetists head back to Guayaquil today, so if we do get some more patients I will be doing the anaesthetics, which would be delightful.

Time to get on with the day!