Building a refuge for teenage moms in Costa Rica 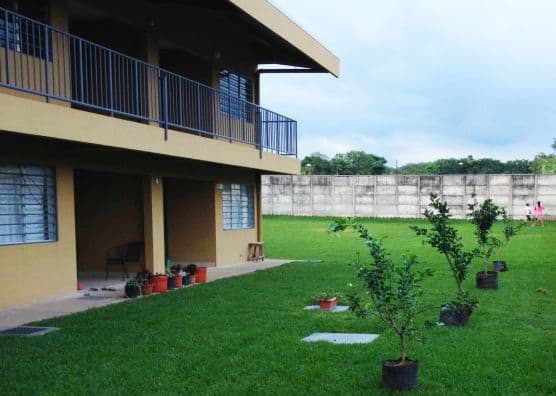 A trip to Costa Rica to help finish the construction on apartments for young, abused moms moves the hearts of Samaritan’s Purse Team members.

November, 2014—Another trip has come and gone. It was a huge success by everyone’s standards. The team that was assembled was definitely of the Lord’s choosing—they worked together well. They were fun-loving and joking, and we all soon became good friends.

The first workday in Costa Rica started early—the sun is quick to shine and so were we. I was amazed at how, within the first day or so everyone, had found  his or her  own niche. Some were speed painters and tackled the exterior, while others were more detailed and tended to the cutting-in and edging.

Monday morning of the second week we started shifting gears—some were finishing up the last of the painting and detailing of the rooms; others started the big job of cleaning up. There was a lot of construction mess, as well as the usual paint splatters, so many from the team were on their hands and knees with scrapers, cleaning the tile floor. Once the first few apartments  had been cleaned, a couple of the guys started installing the kitchen cabinets, ceiling fans, and TV brackets.

On Thursday, the young moms were allowed a sneak-peek of the apartments and they were truly overjoyed. For our dinner and evening meals we walked across the street and shared time with them and their kids. Their heartache soon took its toll on our own hearts. They have been the victims of abuse and are paying a terrible price.

‘T’ has two kids, both of whom suffer from some form of handicap due to incest. ‘L’ is a very bright gal and had memorized all our names in the first few days. Her son wasn’t expected to live after birth. Miraculously he has, though he suffers from an obvious malady. ‘R’ is one of the newer girls and still cries herself to sleep at night. ‘F’ spent the first three years of her life in prison with her mother, who was incarcerated. She was tough and caused a lot of trouble at first, but with time, love, and a lot of prayer, she accepted the love of God and by His grace has become His child. I truly believe that she—like all the girls—has a real chance to blossom into  the person  God created her to be despite her troublesome background.

To put the icing on the cake, our team’s church back home in Alberta chose the girls’ shelter as their Sunday School project, raising $7,000 for some landscaping around the home. The apartments are complete, with just the last of the furniture to arrive  before the girls can move in. What a joy to finish the task and see the excitement that it brings.

Note: The girls and their children have since moved into their new apartments and are reaping the benefits of the Samaritan’s Purse Team’s hard work and prayers!