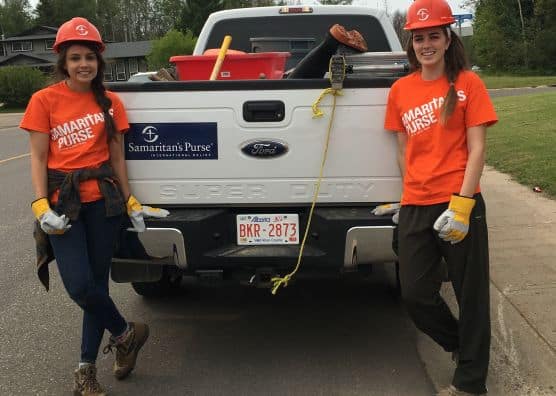 I remember seeing videos of people driving through flames as they evacuated a town in northern Alberta. I was finishing my last semester of University in central Virginia and preparing for an internship with Samaritan’s Purse in Calgary. I remember thinking how unbelievable the fire looked, and how distant it felt.

Fast forward to mid-July and I’m aboard a plane to Fort McMurray, ready to serve with Samaritan’s Purse and help wildfire victims. Much of our work involved searching through the rubble of burned homes, looking for anything useful that might have survived the flames.

As you may have guessed, sifting is an extremely tedious task. Sifting is for the hopeful. The really hopeful will hunt all day for one item. What starts as a hopeless endeavor often turns into an exciting treasure hunt. It felt like a miracle every time something significant was found.

Volunteers found rings, necklaces, pages of books, knitting needles, photos, and various other items. Giving an item to its owner was the best part. The response was usually a mix of astonishment, disbelief, and gratitude.

But isn’t that the nature of God, to bring hope to a hopeless situation? Think of Jesus’ disciples during the three days between His death and resurrection. The disciples spent three years following a man, watching His miracles, and studying His teachings. When Jesus died, I bet they had a hard time swallowing the fact that it was all true.

Even so, their hope was restored when Jesus rose from the dead. Even Thomas, who initially refused to believe, became overwhelmed with hope after seeing and touching Jesus’ wounds.

As an American in Canada for the first time, I was honored to be amongst  the volunteers bringing hope to Fort McMurray. If asked, I would go back again in a heartbeat.

Please join me in praying for the recovery  of this northern Alberta city.