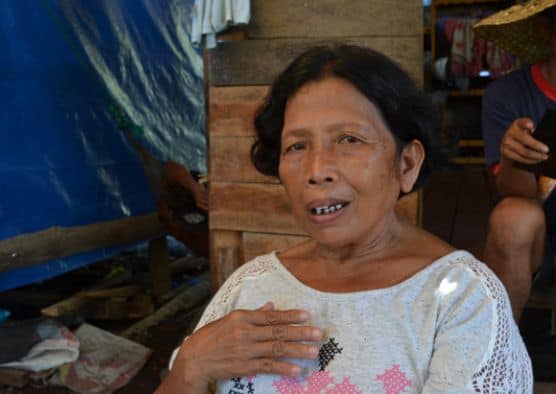 Lloyd, a ministry coordinator with Samaritan’s Purse in the Philippines, shares how a recipient of our emergency aid following Typhoon Haiyan was grateful for the helpâ€”and also a copy of the Bible.

July, 2014—It was hot and sunny as I traveled to Santa Fe with a group of Bible distributors from Samaritan’s Purse. The task was to distribute a copy of the Bible in the local dialect to the beneficiaries of our shelter program. As we arrived in Santa Fe, I noticed the tarpaulins of Samaritan’s Purse right away. They could be seen on every household. If it was not used as a roof, it was used as a wall. The people of Santa Fe were severely affected by the devastation when Typhoon Haiyan hit the Philippines. 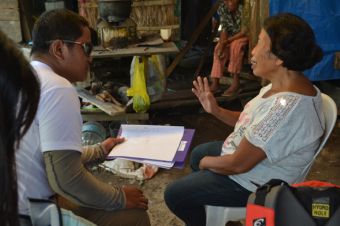 There was one elderly lady who was watching me as I passed by her house. I approached her, thinking that she wanted to say something to me. Her name was Teresita. I asked her, “How are you?” and she replied, “I’m fine” and immediately said she was grateful to Samaritan’s Purse for coming to their place. She told me how their house had been flattened by the typhoon and that until Samaritan’s Purse came, they had no place to live. She said, “An Samaritan’s Purse la an nagtuman han ira say pagkadi pabulig ha amon” or “It was Samaritan’s Purse who came in and fulfilled their promise to help us.”

Now Teresita and her family have a home in which to live. She was also grateful to receive a copy of the Bible. She nodded in agreement  with how important it is to also build our souls with the word of God. We ended our conversation with me praying for their family.