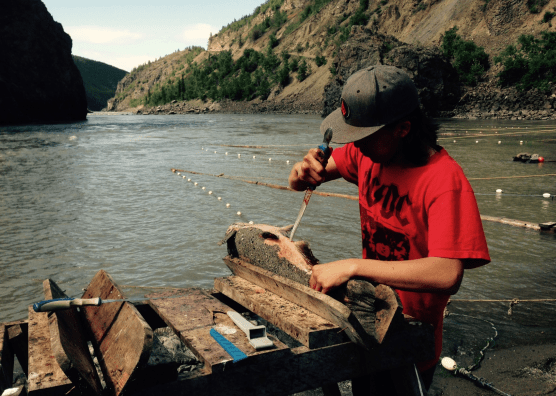 August, 2016—The Samaritan’s Purse Ministry Center in the Dease Lake region of northwestern British Columbia is experiencing a temporary reduction in the number of local youth participating in the center’s programs as many families in the area focus their attention on the annual fish camp.

For centuries, the Tahltan First Nation people have waited for the annual salmon run on the Tahltan and Stikine Rivers. It’s a time when salmon swim upstream to their spawning grounds. For the Tahltan people, it’s a crucial period when every member of the family becomes involved in trying to catch and store enough salmon to feed their families for months to come.

Many Tahltan leave their permanent homes in Dease Lake and other surrounding communities and temporarily live in tents, trailers, or small cottages (hence the name “fish camp”) along the scenic riverbanks. Some catch fish using rods and reels while others rely on nets stretching out into the river.

“I can remember doing this with my family since I was five, and I was probably doing it even before that age,” said a 36-year-old Tahltan Nation member, while he and his two sons gutted and cleaned several large salmon  caught in the family’s net at the junction of the Tahltan and Stikine rivers.

A heavy equipment operator at a local mine, the man said he and his boys store the salmon they catch in ice-filled coolers  , then  take them home and freeze them.

Other fish camp participants preserve salmon the same way First Nations have for centuries—by smoking them. Tahltan member Willie Williams has a smokehouse at the fish camp site to which his family has been coming each year since he was child. “I grew up around here,” he says.

Williams notes the annual fish camp is not only an opportunity to gather food, but also to unite with family members and friends “”some of whom no longer live in the area, but who come back each year for the salmon run. “It’s like a big family reunion for many of us. We look forward to this time and celebrate it.”

Most Tahltan families will spend a couple of weeks at the fish camp before returning to their normal lives and homes. So while fewer children have been showing up at the ministry center in recent days, staff there know it’s only temporary.

“They’ll be back and we’ll be happy to see them,” says lead youth worker Josiah Atkins with a smile.

Local youth participate in a wide variety of activities at the center. There are crafts, hiking, biking, soccer, Frisbee, charades, water relay races, watching movies, playing video games, music jams, skateboarding and more. All of it is designed to help the young people have safe and wholesome fun.