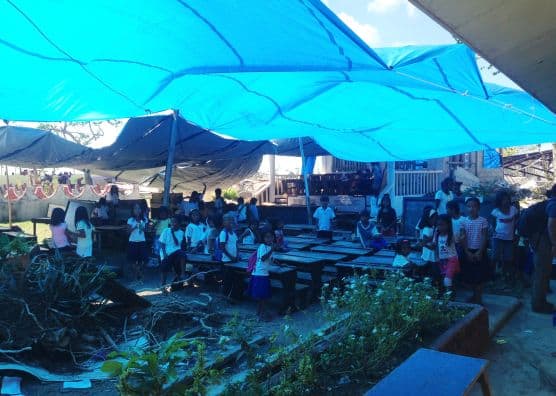 Samaritan’s Purse staffer Michael Dytynyshyn helped with logistics after Typhoon Haiyan, and had the privilege of delivering vital resources to students on Kinatarkan Island.

February, 2014—The sun was rising as I stepped from the shallow water onto the small boat that would bring me to Kinatarkan, a tiny island that had been hit hard by Typhoon Haiyan in the Philippines.The tide was out and the villagers were already digging for clams to feed their families or sell at the market. The experienced captain started up the old diesel engine; his nephew pushed the boat into deeper water, and we were off. In the distance I could see HMAS Tobruk, an Australian Navy ship, slowly disappearing in the distance. I had to get to Kinatarkan Island before them.

The previous day, the Australian Navy had delivered around 20 metric tons of High Energy Biscuits (HEB) that had been donated to Bantayan Island typhoon victims by the World Food Program. It had been a laborious day unloading the landing ship at the dock and then transporting the commodities to the warehouse we were using. I was grateful for   the sailors and local disaster response volunteers who had worked tirelessly in the sun and heat to make it all happen.

But today was a different story.  The HEB were going to be delivered to the island’s schools, and I had to be there to receive it on behalf of Samaritan’s Purse. Our boat was running low on fuel, access to Kinatarkan was difficult. The journey from Bantayan is usually around 90 minutes if the sea isn’t too choppy. This morning the sea was smooth, and after about 45 minutes I could see our destination off in the distance. HMAS Tobruk was setting anchor a ways away because of the shallowness of the water.

Then, without warning, the engine of our small boat began to sputter and then died. I wasn’t surprised—the boat had  seen better days—but this was not the time! The last thing I needed was to be stranded in the middle of the ocean, trying to get to a meeting  that I couldn’t miss! I chuckled—there was absolutely nothing I could do. But I knew God was in control.

After about 15 minutes of fiddling with the engine, the captain was finally able to get the boat going again. I could see two of the Australian Navy’s amphibious craft leaving the main ship and heading to the island. When we arrived on the beach at the exact same time as the Australian vehicles, I couldn’t help but smile. My conviction that God was in control had been confirmed.

The whole village gathered around as the amphibious craft drove out of the water and onto the beach. On an island with no functioning vehicles or any transportation infrastructure whatsoever, this was a sight to see. The Australians pulled into the main square and unloaded the HEB pallets with enthusiasm. Everyone was so excited to be able to help in the relief efforts.

Then, as quickly as they’d arrived, the craft departed, receiving many   thanks   from the villagers. Now it was my turn to arrange motorcycle transportation of all the boxes to the island’s four schools. Three hours later, the HEB were in the principals’ hands and each child would receive a pack  a day for the next two weeks.

It was rewarding to be able to serve alongside the community leaders, the Australian Navy, and World Food Program staff. As the children and teachers thanked me for the relief goods, I  thought how privileged I was to be able to help out. I thought of all the donors in Canada and around the world who had made the day possible. I left the island with a full heart, and of course there wasn’t a single glitch on the ride home.