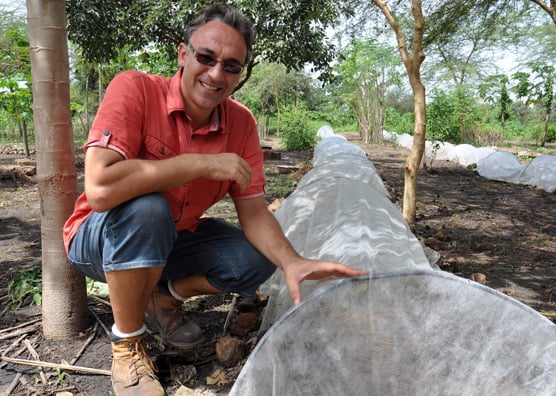 The crisis was real and potentially overwhelming.

The company Eric Toumieux hired to find water for the Samaritan’s Purse-supported Beersheba agriculture project in the West African nation of Senegal came back with a discouraging report: initial drilling found nothing but tiny amounts of salty water.

“That was one of the worst evenings since I arrived in Senegal,” recalled the native of France, who has lived in Africa for 14 years. “I was crying. I felt like God had abandoned me.”

For solace, Eric began leafing through the Bible and came upon Deuteronomy 33:13: “May the LORD bless his land with the precious dew from heaven above and with the deep waters that lie below” (NIV).

“I wiped away my tears, called my contractor and said ‘keep drilling,'” Eric said. His faith in the Lord paid off; after several days of drilling, water began gushing out of the ground.

“Before, he didn’t believe in God, but then he said, ‘Praise to God.'”

The water was vital to expanding Beersheba. Today, the 100-hectare project is a model of sustainable agriculture in a nation where subsistence farming-including cutting down trees to clear arable land, and the misapplication of costly chemical fertilizers-has ravaged much of the landscape.

Samaritan’s Purse’s contribution to Beersheba has included financing the construction of a water storage tower, classrooms, dorm buildings, and a kitchen. Your donations are also helping to train farmers.

“This project is not only the work of our efforts, but of the grace of God,” said Eric.

Your prayers and gifts make agricultural projects like Beersheba possible.