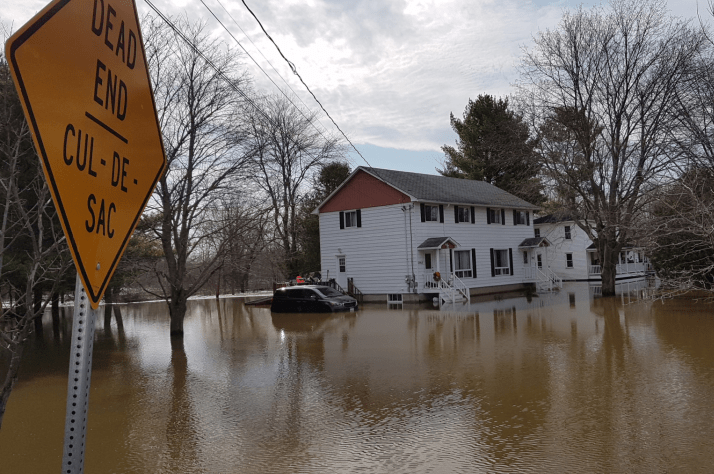 A disaster relief unit from Samaritan’s Purse is en route to Fredericton, N.B., to help with the devastation caused by flooding across the province.

The Ontario-based unit, which is expected to arrive Tuesday, contains essential disaster recovery equipment including generators, pumps, hand tools and safety gear for volunteers. The unit will also act as a volunteer co-ordination centre, outfitted with a communications system and other supplies. Samaritan’s Purse has a second unit, which is based in Calgary.

There are currently two members of Samaritan’s Purse on the ground, scoping out the damage caused by the flood and identifying the areas where their help will be needed most.

A combination of heavy rainfall and rapid snowmelt have caused the St. John and Kennebecasis rivers to spill their banks. Floodwaters are expected to continue rising for one more day before beginning to stabilize.

However, Geoffrey Downey of the Emergency Measures Organization said water levels along much of the Saint John River have already stabilized. The level in Fredericton has not been below 8.0 metres — or 1.5 metres above flood stage — for 10 days, but is expected to drop to 7.3 metres by Wednesday.

One of the most challenging parts of the disaster relief efforts, said King, will be ensuring good communications so affected homeowners know the organization is there to help at no cost, as well as having enough volunteers.

“This work is hard – volunteers are often working in muddy, smelly, hot and humid environments. That’s why we outfit them with all the safety gear they need,” said King.

In New Brunswick, more than 1,050 people have registered with the Red Cross to say they have evacuated their homes, while many others have left to stay with family or friends without registering.

The province has been witness to four other flooding events in the previous years — in 2014, 2012, 2010 and 2008. King said they expect this flood to be as bad, if not worse, than the one in 2008. During that flood, 1,000 people were evacuated from their homes and at least 2,000 people were affected by flooding along the St. John River and its tributaries.

Samaritan’s Purse has had plenty of experience in flood relief, including the previous floods in New Brunswick as well as the organization’s largest flood response — the 2013 southern Alberta flood.

Their second largest relief effort was in response to the Fort McMurray wildfires in 2016.

The disaster relief unit is expected to be deployed for up to six weeks in Fredericton while the second unit is currently remaining in place in Calgary.

King said Canadians can also help their relief efforts for flood victims by visiting their website at samaritanspurse.ca and making a donation.