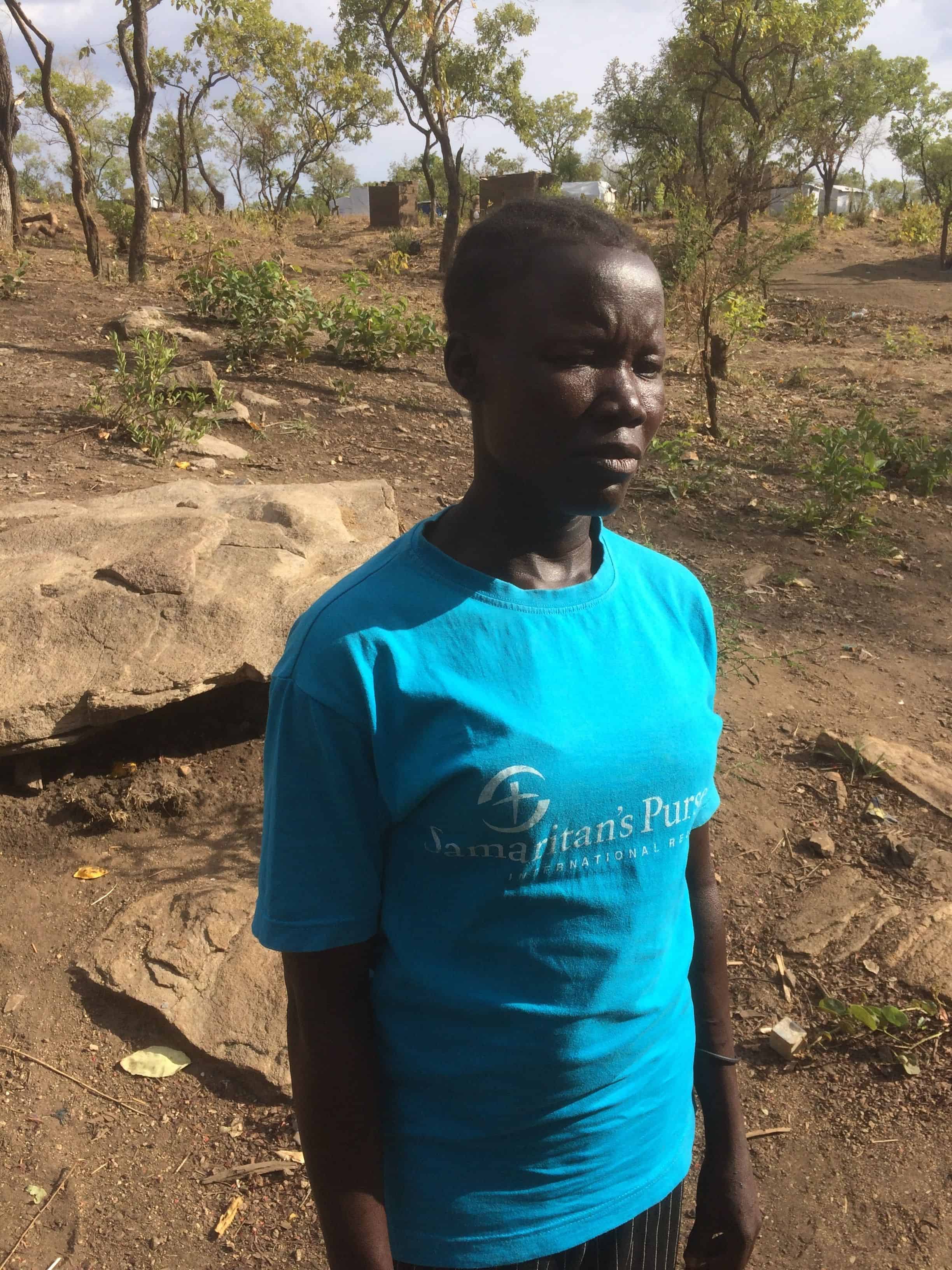 Mary Bayod is one of more than 1.2 million mostly rural people from South Sudan who’ve been forced by a brutal civil war to abandon their homes and crops, and flee to the safety of Uganda.

“They (the military) were capturing some of us and slaughtering people,” said Mary.

She and her five children, aged three to nine, plus her brother’s child hitched a ride in a truck for 400 kilometers to the border with Uganda, before walking almost 100 more kilometers to the Bidibidi Refugee Settlement.

Mary doesn’t know where her husband or her brother are. But she is thankful that she and the children are alive, and have the means to start a new life in Uganda.

The Ugandan government has assigned them a small plot of land, and they now have a small home with mud walls and a thatched roof.

They have water, thanks to Samaritan’s Purse donors that paid for the drilling of a borehole well and construction of latrines in the little community of refugees and Ugandans who were already living there. They’ve also received seeds and farming tools from Samaritan’s Purse to plant crops to supplement the emergency food supplies provided by the United Nations’ World Food Program.

Robert Baryamwesiga, the Ugandan government official responsible for the Bidibidi Settlement and its 272,000 residents that make it the largest refugee facility in the world, says: “We thank you, Samaritan’s Purse, for working with us here. We’ve been working together (in Uganda) for a very long time.”

“When we came here, we had a lot of challenges,” Mary recalled. But now that her family’s basic needs are being met, and the children have started attending school, all of them are starting to feel settled.

“I love to stay here,” Mary said. She likely will for several more years, unless the fighting in South Sudan between government and rebel forces that began in mid 2016 finally comes to an end.

Meanwhile, Mary has been elected by other refugees as a member of the local “Water Use Committee” that oversees the borehole. The committee monitor’s the deep water well’s performance, including its water quality and volume, and provides maintenance, thanks to training from Samaritan’s Purse staff.

Her role on the committee is an additional responsibility for Mary, who has six children to care for, but she sees the opportunity to serve as an opportunity to also say thanks to Samaritan’s Purse and its donors for how we’ve helped her gain access to water, latrines, and food she can grow herself.
“I am very grateful,” Mary says with a smile, while proudly wearing a bright blue Samaritan’s Purse t-shirt that identifies her as a member of the water use committee.

Please pray for Mary as she continues her role with Samaritan’s Purse in the Bidibidi Settlement. And please partner with us financially and prayerfully as we meet the needs of tens of thousands of people from South Sudan as they make their way into Uganda, with no shelter, food, or water.

Samaritan’s Purse is responding to the crisis in East Africa caused by severe famine, drought, and conflict. We provide food, shelter, safe water, medical care, and other aid. Your gift will help us bring critical resources to the those affected in the name of Jesus Christ.