Starting over once again after the flood in Serbia

May, 2014—Time after time, I’ve been struck by how eagerly people want to tell their stories, to be heard. On the side of the road in devastated Obrenovac, Serbia  with floodwater marks high above my head on the city walls, they would approach me and tell their stories to us through Daniela, our translator. There is something powerful about slowly hearing a translated story, piece by piece. Each powerful sentence is imprinted on my mind as I listen.

“It was terrible. Terrible!” Sladja said, pulling the mask down over her mouth. “The town was flooded within half an hour because a huge stream of water started pushing through the town.”

There was still water in Sladja’s apartment after the flooding, so she had come to help her employers, Miodrag and Smilja Zivanovic, empty their shoe store of its now ruined contents.

The Zivanovics were wearing mud-spattered rubber boots and gloves as they hauled out pair after pair of ruined shoes from their shop. “Nothing can be saved,” Smilja said, gesturing to the mound of wet and muddy shoes piled on the sidewalk outside. 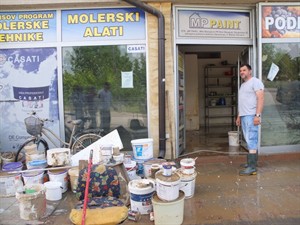 Next door, Pero Stanojevic, who owns a paint store on the main floor and lives with his family in the apartment building above, described what it was like the night the floodwaters rose.

“The water, in an hour, rose two, three meters,” he said, which forced them to make an emergency evacuation in the middle of the night. Brian, Pero’s cousin who flew in from Toronto as soon as he heard about the flooding, showed us how high the water was when his cousin and family evacuated.

“They barely got out. The biggest part was just getting the baby out,” he said.

As pumps emptying water from the basement rumbled in the background, Brian described Pero’s situation.

“Some of these people came in the war. My cousin came from Croatia. He lost everything over there, came over here and started all over again. Twenty years later…”

I knew what Brian was about to say  -twenty years later, Pero has lost nearly everything again. His paint machines were rendered inoperable by the silt and sand that washed into the machinery, and he and his family can’t return to their apartment above the store until water and electricity have been turned back on. “Thankfully nobody is hurt… We’re just going to start all over again.”

Please pray for Sladja, Miodrag, Smilja, Pero, and their families as they pick up the pieces of their livelihoods to “start all over again.” More than anything, may they experience the hope that comes from knowing they have “treasure in heaven that will never fail, where no thief comes near and no moth destroys” (Luke 12:33, NIV).