A DART member's first impressions of the flooding in Serbia

May, 2014—The sandbags along the road to Obrenovac were an early warning sign  of what we were about to see. People were milling around buying supplies and walking down roads that were often still wet or covered in water. Military and NGO tents were set up. Police and security officials were directing traffic, stopping cars from entering the flood zone.  More than  300 police were deployed to the area—tensions  run high in this type of stressful situation.

We had to wait in line on the side of the road for quite a while before we could enter the flood-stricken town. The road still seemed closed to traffic and we could see pumps, trucks and equipment in action. We later learned that the reason for the delay was because business owners were being allowed back into the city for the first time. They  were also  driving in to see what damage had been done.

When we finally entered the city, mud and silt were everywhere. Cars that had been drowned in floodwaters were still marked with dirty water lines, and in many cases, completely covered in brown silt that was drying to dust in the sun.

We were shown the Obrenovac School, which was a planned evacuation point, but even it had flooded. Instead of finding safety there, people had been airlifted out by helicopter.

“No one expected the flood here on the hill,” said Pastor Goran, a member of our Operation Christmas Child national leadership team, who is helping coordinate our disaster response with church partners. The sun was out, which was helping to dry the area, but water remains in many places.

We visited local businesses impacted by the floods and met an elderly lady for whom we prayed. We also stopped at an evacuation center where 37 people including children and the elderly have been living since May 17. We met with them to find out what their needs are. Lord-willing, and thanks to the generosity of our supporters back home, we’ll be back very soon to help meet those needs.

Read more about how Samaritan’s Purse is responding through local partners to what news agencies are describing as “the worst flooding on record in the Balkans.” 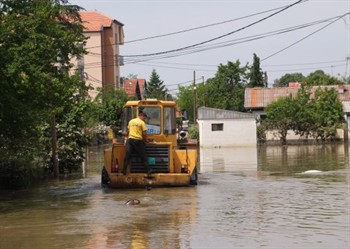