Starting over, again, in the Philippines

Super Typhoon Haiyan raised the bar to a new high for the ferocity of storms in the Philippines. One of the strongest tropical cyclones ever recorded, it shocked many as it broke records and devastated the country.

By comparison, the damage caused by Typhoon Hagupit doesn’t seem too bad. The storm that struck the Philippines on December 6, 2014  was smaller than Haiyan in every aspect: in size, strength, path, and devastation. 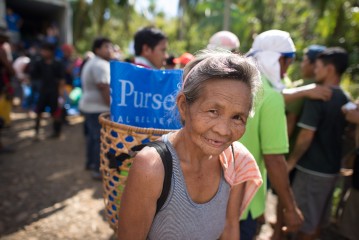 When viewing it through the lens of catastrophic Typhoon Haiyan, the effects of Typhoon Hagupit are easy for some to dismiss.

But for the thousands who lost all they had worked to recover over the past year, Hagupit was monstrous.

Laah Alago put into words what many are feeling in Samar, the hardest hit area: “Haiyan was not the worst. This was the worst for me.”

Laah felt the full force of Hagupit. She was at home alone as the storm came through and ran to a neighbor’s house for shelter.

“The wind and the rain were very, very hard, very strong,” she said.

Laah sat amidst the rubble of her home just days after the storm had passed. Belongings were strewn all around, and the structure that was left of her house was fallen and torn apart.

Still recovering from Haiyan, she cried as she talked about the struggle and the investment she had been put into a livelihood of harvesting crabs, all of which was now lost to Hagupit.

The community of San Mateo suffered a great loss. Floods and mud swept through this isolated area carrying away crops, homes, and damaging everything in its path. Five days after the storm, the residents of San Mateo still looked in shock at what they had found when they returned from their mountain hiding places.

Samaritan’s Purse distributed hygiene kits, water kits, and tarps to the 444 families of San Mateo. Roads into the community were impassable, so the families had to walk 30 to 40 minutes to retrieve the emergency supplies.

Not even an hour after the distribution was complete, families were putting up tarps for shelter all through San Mateo.

While Typhoon Hagupit did not compare to Haiyan in many ways, for Laah and the families of San Mateo, and other communities in Samar, the second typhoon was far more devastating.

Please join us in praying for these families. They are facing a long road of recovery.